After reading and hearing mostly negative news out of Pakistan, Aisha Chowdhry wanted to know what was really happening on the ground. She bought a camera and tripod, and traveled to Lahore, with Google as her only guide to shooting video. 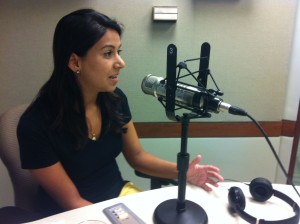 Aisha Chowdhry started her journalism career by filming a documentary in Pakistan. (Photo by Michael O’Connell)

Born in Pakistan and fluent in Urdu, she had an urge to tell man-on-the-street stories through a documentary film. Pakistan: Inside the Tinder Box, the end result of more than 100 interviews she made over four weeks in 2009, shows the “smiles and tears of ordinary folks—students, teachers, slum dwellers and musicians—struggling with terrorism.”

“I had wanted to be in journalism when I was younger,” Chowdhry said. “I would stand in front of the mirror and pretend like I was anchoring the news, but I knew nothing of what journalism really was.”

Her first foray into reporting launched her on an entirely new career path. Before the documentary, Chowdhry had worked in real estate marketing.

“I really did this as a learning experience. One, just to see how it went for me. And two, for educational purposes,” she said. “I wanted to inform people, because you probably won’t see a lot of this otherwise.”

After wrapping the film, Chowdhry decided that formal training was the next logical step and completed a master’s in journalism at American University. It wasn’t long before she was back in the field.

For a month, she was embedded with the U.S. army in Afghanistan as a freelance correspondent. It was her first time in a flak jacket and helmet.

Her stories focused on the impact of the NATO Training Mission, which oversees the training of Afghan police and military forces throughout the country. Her work appeared in The New York Times and USA Today.

“I think the more you think about where you are and what might happen to you, the less able you are to take in what’s happening around you,” she said. “You have to learn to tune that out.”

Most recently, she was the Pakistan correspondent for Reuters, working out of their Islamabad bureau before coming to Washington earlier this year.

With two stints of international reporting under her belt, Chowdhry is now diving into local reporting and social media as a multimedia journalist at CBS affiliate, WUSA-9.

“I’ve had to really think about local news for once, which has been a challenge,” she said. “But I think it’s important to know what matters in your neighborhood and at the same time nationally and internationally. You’re always kind of evolving as a journalist.”

Even though she seems settled, Chowdhry has not lost her desire to cover conflict zones. If the right circumstances came along, she would head overseas in a heartbeat.

#59 – You should meet NPR’s Stephen Thompson