They kept going in and out of the edit booths, trying to figure out how to do things. Nobody was helping them. 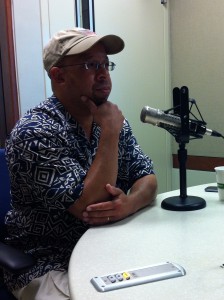 That’s how Doug Mitchell, a producer, a director — a wearer of may hats — at National Public Radio, first saw that batch of NPR interns in 1999 struggling to get their work done.

“I was right there and I’d walk across the hall and say ‘No, no, you do it this way,’ Mitchell said. “I thought, nobody’s helping them, so maybe I should help them. So, I helped them finish their show that summer of ’99 and I thought, you know what, this is a really good idea. Let me see if I can carry it forward.”

The kids are all right

Mitchell first came to NPR in 1987, starting out at Morning Edition, then Weekend Saturday and the weekend edition of All Things Considered. He also produced a show called Weekly Edition and, thanks to his foray across the hall to help those interns, he created a project called Next Generation Radio.

“In addition to doing and helping to develop an internal program called Intern Edition, where interns produced their own program,” he said. “I did that for several years. That became my job. I started working with the interns because they had at the time in ’99 no one helping them and I just raised my hand.”

A lot has changed in media since 1999. But the new generation of young journalists, Mitchell said, has the same goals as their counterparts two decades later. They want to be first-class media professionals.

“I think the thing that is different … is that they’re much more mission driven,” Mitchell said. “That is, they are interested in their community, they want to contribute in a valuable and valued way. Tell stories of what’s happening around them. Anytime I see any stories that have ‘Oh, the Millennials are selfish and they’re lazy and they’re blah, blah, blah,’ I just think that’s crap. That’s just crap.”

From wrangling interns to supporting entrepreneurship

As the co-project director of the “New U” Entrepreneur Fellowship Program, Mitchell is helping to foster the next generation of media leaders.

Funded by the Ford Foundation, New U tries to hook up entrepreneurs with people who can help them.

“Suppose you want to start your own company? Not become a senior manager
within an established company, like a big traditional company, but be the
company, then create the jobs,” Mitchell said. “With all the jobs going away it just seemed like perfect timing to teach people on how to do that.”

New U aims to create opportunities where media entrepreneurs can have conversations with business owners, potential investors and venture capitalists.

“Everybody gets to know one another and then those who have access
to capital can then identify those who we have identified as being worth
investing in,” Mitchell said. “We’re not talking about millions of dollars, we’re talk about time in the beginning, and then helping them develop to where they can get in front of people who may be interested in buying their company.”

Promoting diversity in the board room

The other goal of New U is to grow entrepreneurship and business opportunities in communities where that isn’t always found.

“Why is it that there are no people of color as CEOs of major corporations?” Mitchell asked. “Why is it that all these technologies that we use today are not led by people of color? Why is that? Is it because we don’t have any ideas? I don’t think so. I think it’s that we’re not in the ecosystem.”

Part of Mitchell’s strategy is to “cross pollinate” between different support groups to promote the next generation of leaders in media.

“There’s mentoring, there’s coaching, with an idea of what media is going to be in the future,” he said. “I think we have to get past this diversity is black and white. It is not. Diversity is economic, it’s educational, it’s geographic, it’s gender, it’s sexual orientation, it’s all of these things. The ideal pie in the sky would be to have everyone represented at the table.”