Elise Hu and Matt Stiles have blazed a trail of innovative journalism at NPR. 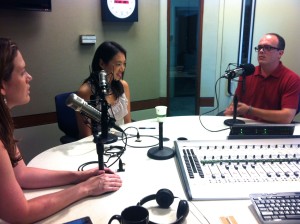 “We’ve both sort of developed a reputation there where people trust that we’re trying to do things that are innovative and different and have unique value,” said Stiles, the data editor on NPR’s news apps team. Before coming to NPR, he was a reporter and data applications editor at The Texas Tribune, a digital news startup in Austin.

Hu is a tech and culture reporter at NPR. She hosts the All Tech Considered blog at NPR and reports for Morning Edition and All Things Considered. Before coming to NPR, she was a founding journalist at The Texas Tribune.

Hu and Stiles met before they began working together. She was working for television in Waco, Texas, and he was at The Dallas Morning News. They met through a mutual acquaintence when Hu had driven up to Dallas to visit with friends.

“I actually got a cold call from NPR while I was producing a podcast,” Hu said. “I used to moderate our weekly Texas political podcast at The Texas Tribune and just as I was sort of cleaning it up and editing it afterwards, I got a call from a recruiter at NPR who was looking for somebody for a state public policy network that NPR was starting, which was then called State Impact. They needed a digital editor to sort of set the vision, help hire the reporters from the member stations and think about it as if it was a startup within NPR.”

Since Hu had experience launching a startup, she was an ideal fit and there happened to be an opening for a data journalist.

“Somebody who could teach and coach the reporters on different programs and how to really work with access and tell stories with data,” Hu said. “I had not suggested my husband, of course. But, there’s good journalists at NPR and they realized two or three months later after I had said that, hey, my husband happened to fill those skillsets they were looking for. So they approached me and asked if it would be OK if they approached him.”

At the time, Stiles was doing data applications for the Texas Tribune. “They needed a data journalist to work with these reporters we were hiring for State Impact, so it was a perfect fit,” Stiles said.

In the early days, the State Impact team was something of a small startup within the larger organization.

“We were in a studio, isolated from everyone else in the newsroom in the building, ” Stiles said. “We were essentially in an old converted studio that was like an office. And so, it was like we were in a pod working together, launching this thing. It was a lot of fun. Like all startups, it was difficult.”

Eventually, as Hu and Stiles moved into other positions in NPR’s Washington, D.C., headquarters, they came to realize they were a part of something bigger.

“Now that we’re part of the larger organization, we realize that, hey, we were kind of like R&D, you know?” Hu said, laughing.

One advantage to this initial isolation was that they didn’t have to rely on the infrastructure of NPR. “We did things like put our data in the cloud, innovative things for digital at NPR that the larger organization noticed,” Stiles said. “In that sense, it was a good experiment.”

Hu agreed. “State Impact really pioneered and experimented with a lot of news apps and news app design that was forward-thinking at the time that we did it,” she said. “And so, the front end designer who was on State Impact is now on news apps. Matt is now on news apps and so, it was really good that we were able to prototype some things and bring them out into the wider newsrooms.”

Read a transcript of our interview with Elise Hu and Matt Stiles.