There’s a famous children’s book called “Everybody Poops.” If that title is true, then the inverse is also true — “Everybody Eats.”

The business of what people eat is a $4.6 trillion industry — the largest in the world. 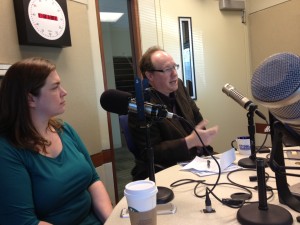 Where there’s a topic of interest, especially one that involves every person on the planet, there will be journalists to cover it — from restaurant critics and cookbook reviewers to publications that focus on food production and regulations.

For almost 55 years, Food Chemical News has been providing detailed information about food regulations to an industry audience, via its print newsletter and website.

“Our audience is a fairly mixed bag of different types of professionals,” said Jason Huffman, editor-in-chief at Food Chemical News. “A lot of our readers are in the food industry, food company executives. We also have government officials who read our publication and consumer advocates, attorneys, consultants who serve the food industry. Some of them sue the food industry as well. It’s anybody who’s concerned with food regulation and that’s a large number of people.”

Unlike other industry publications, Food Chemical News isn’t financed by advertising. It operates on a subscription model. That means it has to provide content for which its readers are willing to pay thousands of dollars a year to get.

“We have to deliver a high level, down in the weeds type of content and we do that by really getting to understand the regulations and then getting into the sort of nuances of the regulations,” Huffman said. “What does it mean? We’ve got to be kind of inside the Beltway. What’s happening before it actually gets to the Federal Register. What’s being worked on. And then there are all these things that happen in and around Washington that don’t necessarily make it into the Federal Register and we have to be on top of all that.”

Paywalls before anybody was talking about paywalls

While The New York Times and The Washington Post struggle with how to make a paywall work, subscriber-based publications like Food Chemical News have been making that model work for years.

Times for the subscription-funded publications, though, haven’t been all that rosy lately.

“We haven’t had great years recently,” Huffman said. “I got into this back in the ’90s on a couple of other beats, and hey, times were good, when this model was kind of fresh and new. But we’re struggling just like everybody else. But I don’t think the advertising based world’s doing that much better.”

Beyond the business end of things, trade publications present challenges for new journalists and seasoned reporters coming from broader based news outlets.

“Transitioning to government writing, where you’re dealing with people who are fully invested in what you are writing about, whether it’s regulation or policy or new testing methods for pathogens, it’s a whole different world,” said reporter/editor Amber Healy.

Before coming to Food Chemical News, Healy was a community reporter at The Connection Newspapers in Northern Virginia.

Facing your fears, finding your voice as a business writer

The biggest anxiety for journalists coming into industry-based writing for the first time, Huffman said, is the feeling that their sources and readers know more about a particular subject than they do.

“I had a journalist one time who came up to me after two years on the job and she said, ‘You know Jason, I feel like a poser, like I’m faking it here,’” he said. “You always have that insecurity when you get into this stuff.”

One of the tricks Huffman uses to help young journalists to become more comfortable with covering a new technical area is to make sure they have a grounding source.

“So, you think you’ve got it, right? You wrote the story. You put it down. But are you sure? You have a friendly source that you call up,” he said. “You don’t give them the whole story, but you kind of go through the basic components of the story to kind of say, ‘Hey, did I understand this correctly? Am I using this term correctly?’ You know, it’s kind of a good, you can do that throughout the reporting.”

Healy adds that being upfront with a story’s source about your lack of expertise is another effective strategy.

“That is just saying, ‘Listen, this is a new subject for me. I don’t know a whole lot about it. Can you explain it to me? Can you really just break it down and explain it to me?’” she said. “And then, as you cover a subject, as you cover an area, you learn. And once people realize that you’ve learned what you’re talking about, they’re more willing to talk with you, and they’ll give you more detail. They’ll give you more information. They’re more likely to answer your call or return your email, because you have built up the credibility.”

On the It’s All Journalism podcast, Producers Megan Cloherty talk to Jason Huffman and Amber Healy of Food Chemical News about the challenges of covering the food regulation industry. Huffman also talks about his side project, the YouTube series “The Knife and Fork Show,” and he offers insight on how journalists can use LinkedIn to promote their content. Follow the link above to download the interview or subscribe to It’s All Journalism on iTunes.

Read a transcript of our interview with Jason Huffman and Amber Healy.