Given enough time and resources, all reporters would take great pride in checking even the smallest details in their work. Unfortunately, given the constraints of time and space, that isn’t happening as often as it used to, but some newsrooms have earned acclaim for their dedication to the truth.

Mark Stencel, a former managing editor for digital news at NPR and senior editor at both The Washington Post and Congressional Quarterly, has authored a report for the American Press Institute on the importance of fact-checking, especially in presidential campaigns. 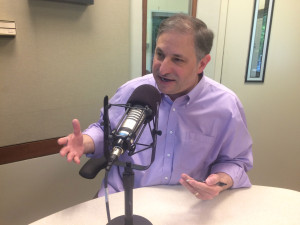 Mark Stencel, a former managing editor for digital news at NPR, writes about fact-checking for the American Press Institute. (Photo by Michael O’Connell)

He points to the 1988 election as a kind of turning point. “The way advertising was coming across in that campaign sparked a real discussion on how to respond to [negative advertising that featured less-than-true claims]. My first boss in Washington, David Broder, started columnizing this,” going on a “crusade to more aggressively fact-check advertising claims. That’s when things really got going,” he said.

Soon, other reporters, including Brooks Jackson of The Wall Street Journal, started doing fact checking sessions for major news organizations, including CNN, to help delineate the truth from exaggerations.

Today there are three major fact-checking operations in the United States: PolitiFact, FactCheck.org and The Washington Post’s Fact Checker, each of which has developed a system for taking a claim, reviewing its origins and validity and explaining to readers what’s true and what’s less-than-truthful.

“Those three sites have set the standard,” Stencel said. “To take on that much reporting and maintain it day in and day out for as long as they have, at this point, is just a remarkable journalistic accomplishment.”

In particular, he praises the team at PolitiFact, created at the then-St. Petersburg Times during the 2008 presidential election. With just a few people in their Washington, D.C., newsroom, the staff there wondered how they could cover the campaign differently than every other newsroom in the country.

“They make this big bet that, rather than jumping on the airplanes and trying to do the same story as everybody else was doing, let’s instead focus all that energy on something that we can make a difference in, and that was fact-checking,” Stencel said. “It certainly made their coverage stand out; it certainly won them a Pulitzer. It’s a great example of the distinctive power of doing fact checking and what that can mean for a newsroom that’s trying to stand out.”

Of course, Stencel would like to see other formats and styles of journalism give fact-checking a try.