WASHINGTON – Rick Blum works as an advocate for journalists who may unfairly hear the word ‘no’ from a government agency. As coordinator of the Sunshine in Government Initiative, he champions the rights for transparency and open government provided by Freedom of Information Act.

While FOIA gives journalists the right request the release of government records, Blum says that process can often take time, especially at the federal level. 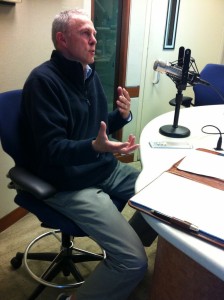 “It’s not going to force something to happen next week,” he said. “But, if you’re on deadline and you’re expecting to file a FOIA request with an agency, it’s going to be tough. I have to tell you. You’ve got to think ahead.”

In fact, the quicker route for a journalist may be going to his or her sources to track down the information. But, when all the usual avenues are exhausted, the reporter can easily fill out a FOIA request.

“If you can be as specific as possible, you’re much more likely to get a response faster,” Blum said. “If you’re really fighting and you want to see all memos related to how a decision was made to declare a chemical safe, even though you’ve got residents, readers who are concerned about their drinking water or something like that, that might take a little longer and you might want to ask for a broader set of records. So, really try to figure out what you really need.”

While a request might be filed, Blum suggested following up with the agency and staying on top of the status of the request.

“Say, ‘Here’s what I’m really looking for. I really want to get just how much money was spent. And so, I’m asking for all the memos about spending, but I’m really trying to get just the accounting. That’s at the heart of what I’m trying to figure out,'” Blum said. The more specific reporters are, normally the faster the requests are met.

“I think it’s really trying to get all this wonderful things that going on with technology and to get them embedded in the FOIA world,” he said. “And to get people to care a bit more about this bedrock guarantee law that we’ve had on the books for decades now and to try to really invest and to make that public right of access to government records real in terms of making the law work faster, more effectively, more efficiently. Harnessing that technology and then also getting this commitment to do it.”

Read a transcript of our interview with Rick Blum.