WASHINGTON – Innovative journalism — it’s not only the class long-time newspaperman Andy Alexander teaches at his alma mater, it has become his passion.

Alexander spent 38 years with Cox Newspapers, part of the Cox Enterprises Company, before becoming the ombudsman for The Washington Post. Now he is both teaching his students and learning from their approach to journalism how best to keep the industry financially afloat. 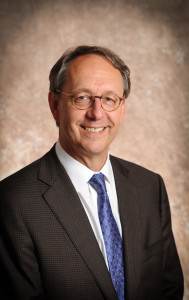 After his 38-year career with the Cox Newspapers, Andy Alexander spent two years as the ombudsman for The Washington Post. (Photo courtesy of Andy Alexander)

“In the world today, I don’t think we have a journalism problem. We have more journalism, good and bad, than we’ve ever had. We have as revenue model problem. And we have to be thinking that way of who pays for it. Doesn’t mean we have to end up like Bill Gates or Steve Jobs, but it does mean that we have enough money to pay for our journalism,” he says.

Alexander sees instilling a business mindset as a priority in journalism education. He talks about an innovative challenge put to Ohio University students tasked with tackling the revenue hurdles of local media companies.

“In my first 20 years in journalism, I don’t think I ever once thought about the business side. Now we have to. That doesn’t mean you have to subvert your values as a journalist. But one of the things when I deal with students and with this Scripps Innovation Challenge competition, we require them to have a business element to their presentation,” Alexander says.

While newspaper revenue is on the decline, Alexander notes it is still a $36 billion dollar industry. And the problems legacy media outlets are running into — declining subscriptions, lower ad revenue, lack of a 6 p.m. audience — all stem from the changing manner in which media is accessed.

To explain to his friends why teenagers aren’t interested in the Sunday paper, Alexander uses this scenario:

“I tell them to envision a teenager. Let’s say Johnny, who is 14, who has never seen a newspaper in the household. All he’s done is he’s gotten his information and on mobile and try to explain to little Johnny that we’re going to be have a newspaper coming in. And you’d have to explain these big sheets of paper that doesn’t have any video, may not even have all color pictures. The news will be sometimes eight or nine hours old. The way we’re going to print it is that we’re going to cut down forests and mash up the trees. That we have these things called presses that cost about $150 million. And then what we’ll do is we’ll hire these people to come around before dawn and throw it on your lawn and if it rains, we’ll put a bag over it. It’s inconceivable. It’s so stupid when you think of it in digital context.”

He says there is not only a disconnect when it comes to how millenials ingest media compared with baby boomers, but also in their perspective of the industry as a whole.

Young journalists have to be ready to be innovative, to formulate ideas and rethink what’s outside the box, Alexander says.

“Talking to news organizations and media companies that are hiring, they not only want young people to have the basics, the journalistic grounding, they want people who think innovatively and think entrepeneurally. And again, they’re not asking them to develop something and make it work in a financial sense, but they want them attuned to that so that they can bring it to their business people, their marketing people and say, ‘We think it has potential. Now you develop it and we’ll get back to the business of journalism.’

Alexander is accessible on Facebook and through Ohio University’s staff listings.

Read a transcript of our interview with Andy Alexander.

#39 – ‘Connecting dots in the dark:’ LinkedIn expert shares his tricks for reporters