Jeff Sonderman learned early in his journalism career that you have to keep teaching yourself and finding ways to learn outside the classroom: trying new tools, reading about the latest developments, listening to podcasts.

“That’s on you now after you graduate,” he said. “There’s less of a sense of ‘I got a degree, I know journalism, I’m good for the rest of my life.’ It’s only going to keep evolving.” 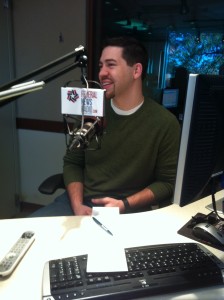 Jeff is the deputy director of the American Press Institute, an educational non-advocacy, nonprofit organization affiliated with the Newspaper Association of America. He is an adjunct faculty member of The Poynter Institute, and previously a digital media fellow there. He also teaches digital journalism at Georgetown University.

His early awareness of the limitations of formal training and willingness to experiment have taken him far, far from where he planned to end up.

When Jeff came out of journalism school in 2004, social media didn’t really exist yet. Facebook was Harvard-only. YouTube had another year until it rolled out.

“It’s a lot on the fly,” he said. “You come out of j-school after going through two to four years of this really focused preparation process for the world, you think you’re entering and suddenly you enter this media world that is changing, that every year or two is shifting drastically from what it was before.”

Jeff went to the Missouri School of Journalism for what was then called the news editorial program, a track that prepared students to write and edit for newspapers.

“I thought I would work my way up to a political reporter in a state capital or at the New York Times at the national desk,” he said.

Instead he landed in Scranton, Pa. He worked as a reporter, city editor and Web editor at The Times-Tribune. He created the paper’s first Twitter account. In 2010, he was recruited to work for TBD.com, a hyperlocal news site that covered the D.C. area.

Looking toward the future

After years of working as a journalist, Jeff was brought on board at API this year to help build a new version of the institute as a think tank, focused on conducting research, training, convening thought leaders and creating tools for journalists.

“We’re on a quest to help journalism become more sustainable and do better, more innovative projects and make money, which is what we all are into,” he said.

API’s root mission is to protect public service journalism. Jeff likes to tell people that a truly free press is a press that can afford to be sued.

“If somebody wants to sue and claim libel to stop [an organization] from publishing something that they don’t want published, there’s got to be an institution or some backing that can stand up and say ‘No, we’re going to publish this.’”

API is focused on all forms of journalism, but works a lot with newspapers companies, often tackling how to do better work with less resources. A challenge faced by papers of all sizes.

When people think about newspapers, the New York Times and Wall Street Journal come to mind, but there are about 1,300 papers across the U.S., according to Jeff. Only three are papers with national reach.

As this period of transition continues, one of the things Jeff foresees is different markets presenting news in different ways.

“For the past several decades nearly every market looked the same,” he said. “There was one major morning newspaper that had a monopoly. There was maybe an alternative paper, a few TV stations.”

The media landscape is becoming more diverse and more accommodating to the audiences it serves.

“Now, you’re starting to see home grown emerging media sources in different places,” he said. “In small rural areas in the Northeast there are nonprofit news startups that are community driven, mom-and-pops that start blogging. Big foundation funded startups in California, and The Texas Tribune, places like that. Communities are starting to take on their own media shape based on what they think is missing and what people can come up with.”