I remember Greg Wyshynski way back when …

Julie O’Donoghue and I worked together for years at The Connection Newspapers in Northern Virginia. She covered politics and I was one of the community editors. 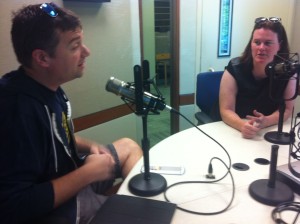 Greg was the guy who ran the sports department, dividing his time between covering high school field hockey games and blogging about hockey separate from the newspaper. He also spent a stint running the Connection’s entertainment page.

The one thing that was consistent, no matter what Greg was writing about, it was going to be fun and probably very funny.

He even wrote a book — “Glow Pucks and 10-cent Beers: The 101 Worst Ideas in Sports History,” which he calls the best reviewed bathroom reader.

So, when Greg left The Connection, it was pretty clear he was on an upward arc and he was going to end up doing something fun and probably very funny.

Flash forward to today and Greg is the editor of Puck Daddy, the Yahoo! hockey blog. There, he applies his talent for finding whimsy in the serious sports world.

Greg also brings his whimsical POV to the podcasting world via the Marek Vs. Wyshynski podcast.

So, indulge us as we catch up with an old friend.