Getting as close to the subject as she can is the way Maura Judkis likes to approach a story. She has spent her short career rising through the ranks of Washington publications with a goal of covering art and culture in the city. Now, she’s at the Washington Post’s Going Out Guide, a division of the entertainment section that previews what’s going on in the city. 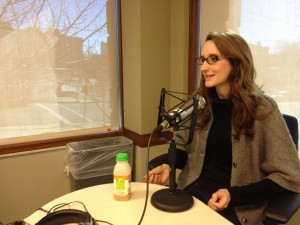 The weekend section is meant to thrive as an online and mobile resource, offering a handy navigation breakdown for users who want to get right to information on weekend events in music, theater, bars and clubs and museums around town. Judkis contributes to the GOG blog, the dining guide, the ‘Go Out Lists’ and the weekly live chats.

While she has a hand in all aspects of content for the ‘Going Out Guide,’ Judkis specializes in visual arts. Her mother and father are both artists. An example of her passion for getting close to artists in her reporting is evident in a story she wrote for the now defunct TBD.com on artist Victoria Gaitan.

“I had met her through the arts scene and she does these kind of spooky, sort of eerie portraits, and they’re often women who, she has the models put corn syrup in their mouths and they dribble it down the front of their body,” Judkis said when she met with Mike and Megan for the It’s All Journalism podcast taping on Jan. 19.

Gaitan heard that Judkis was interested in being a part of the process and learning more about what she was trying to say through her work, so the artist asked the reporter to sit as a model.

“There’s no way that you can describe what it’s like for those models. You can interview them, as much as you want and they’ll be able to tell you, but like you won’t really know until I had that corn syrup in my mouth and I was dribbling it out and my hair was covered in all this other goo. And it was pretty gross,” Judkis said.

Judkis has continued to expand her writing and understanding of different artistic mediums, using social media to help her find story ideas and gain a comprehensive handle on what’s going on in the city. She says she’s often on Reddit.com looking for interesting conversations or tips.

Covering arts and culture is a difficult thing to do, as many publications have chosen to close or minimize their staff and critics who contribute to style and arts sections. Judkis offers advice for reporters coming up in arts journalism — make sure to be flexible, especially upfront, with career choices.

“Be able to cover a lot of different type of arts. There are so many people who want to be music critics. If you can write a little bit of everything you have a better chance of diversifying your skills and maybe getting a job that may not be music. It may be a producer for the style section, for example, but then you get to write some music reviews,” Judkis said.

Read a transcript of our interview with Maura Judkis.