Jack Gillum admits he started out as a computer nerd.

“I was just one of those guys who would literally take apart computers, put them back together again, see if it worked,” he said. “Usually, it didn’t. But when it did, it was neat.”

Gillum went to college intending to study computers, but soon discovered he didn’t want to program all day.

“As cliched as it sounds and as overused as fellow reporters say it, it’s a chance to really hold people accountable,”  he said. “It really wasn’t until I started working at one of my first jobs, at the Arizona Daily Star in Tucson, where I sort of had this shocking epiphany. Maybe I can take the nerdy data-computer and mix it together with pen and paper, shoe-leather reporting.” 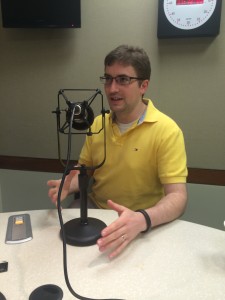 Computer-assisted reporting wasn’t a new thing. Pioneers like Steve Doig, who investigated the aftermath of Hurricane Andrew in Florida, where using data and public records to add greater depth to their reporting.

As a reporter on the Associated Press’ Washington investigative team, Gillum now uses his computer skills on the technology and privacy beat.

During the Newtown, Conn., shootings, for example, AP journalists reacted as they would for any other breaking news story. What was going on on the ground? Are the children safe? Has the shooter been apprehended?

But in the followup coverage, the second or third day stories, that’s when data journalism began to play a role.

“A gunman shows up and kills a lot of innocent kids, how well did the police respond to it, for example? That’s the first thing that goes through my mind,” Gillum said. “It appears that they did, but let’s double check. So, we filed a public records request asking for all the 911 tapes, all the dispatch audio, because we want to, in our role as the press, evaluate how well the government essentially responded the the worst school shooting in U.S. history.”

The key is for journalists to anticipate questions that the readers want answered.

“They want to know, ‘Could this happen in my neighborhood?’ or ‘How well did somebody perform? How are my tax dollars getting used in a different case beyond this?” Gillum said. “I think being able to get our hands on what we call ‘contemporaneous evidence,’ a document showing somebody signing off on a terrible program or money going to something that doesn’t work. It gets beyond what we call the ‘he said/she said’ of journalism. That’s nice to have for context, but it’s nice to have the hard facts, because it’s hard to argue with.”

Digging for those “hard facts” may mean doing a Freedom of Information Request for public documents or digging into publicly available datasets.

“Information comes in all sorts of pieces,” Gillum said. “It’s up to reporters, journalists, to really put this together. It’s no secret that we live in 2014. … We don’t keep things in manilla folders in filing cabinets anymore. … People keep things on databases. They keep things in the cloud. They’re stored behind passwords.”

At the same time, the rapid changes in technology are making it harder for sources to leak information to reporters and the freedom of information laws are lagging behind.

“Being able to understand that piece of the information gathering of journalism is important as we go forward, just as it’s important … as building relationships with sources, taking them out for drinks or for coffee,” he said. “Some of my best sources I’ve never quoted in a story and that’s because you’ve got to trust them and they have to trust you primarily. Building those relationships are also how you find information. It’s just trying to find the right balance in the story.”

In our podcast interview, Jack Gillum talks about how he uses computer-assisted reporting to do his job. For those looking to learn more on this subject, he recommends the The National Institute for Computer-Assisted Reporting (NICAR) program offered by Investigative Reporters and Editors, Inc., as an excellent resource for journalists.