A Pulitzer-Prize-winning business editor at the Philadelphia Inquirer, she left her daily journalism gig in 1994 to become one of the pioneers of the growing civic-journalism movement. 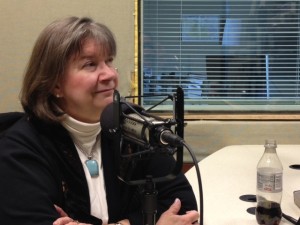 In 2002, she launched J-Lab to help journalists develop new projects with innovative technologies.

“I think journalism is very much in flux,” Schaffer said. “A lot of legacy news organizations have been disrupted. But at the same time, a lot of media entrepreneurs are coming up with entirely new media products that are very exciting. They are filling the gaps that have been created by old media, where old media has pulled out of areas or pulled reporters off the streets. So, there’s a lot of innovation going on and a lot of entrepreneurship going on.”

For 10 years, the J-Lab at American University in Washington, D.C., has funded media startups, particularly community startups and ones founded by women entrepreneurs. Through the Knight-Batten Awards for news and innovation it has distributed more than 200 prizes in support of journalists’ creative ideas.

“The people who apply sometimes they are … professional journalists who have taken buyouts in their news organization or they’ve been downsized by their news organization or they just see an opportunity that they want to pursue on their own,” Schaffer said. “And other times, they are people we would call civic catalysts. They’re people active in their community who see a gap in news-information and they have a lot of historical knowledge about their community and they want to convert their civic participation into a kind of media participation.”

Entrepreneurs turning the eye on media

As more and more media entrepreneurs take advantage of the disruption going on in mainstream media, Schaffer sees the role of these startups evolving, sometimes even assuming the role of media watchdog.

“We have seen citizens become media creators on their own and startup their own initiatives in one way or another,” she said. “The tech tools are very easy to use for anyone. We have seen them take a more active role in responding or sometimes criticizing media reports that come out when they think they’re either unfair or incomplete, or they have something to contribute in the way of a tip or some knowledge so that they can crowdsource a story. And I think we sort of see it in a demand for more transparency in reporting. Citizens don’t just take your word for it anymore.”

One of Schaffer’s hopes is that more people will step forward and launch websites that fill the roles vacated by disappearing legacy news outlets. “I certainly think we’ll see, and I hope we do see, watchdog sites happening in every one of the 50 states,” she said.

Examples of such sites include:

“They’re doing investigative and enterprise stories, and they seem to be making a go of it,” Schaffer said. “Many of them have organized into their own professional group, the Investigative News Network. I think we’ll see more of that.”

In December, J-Lab released Networked Journalism: What Works, a report on collaborative pilot projects at nine news outlets across the country.

“The deal was we asked one legacy news organization — eight of them were newspapers, one was a public radio station — to try to partner with five independent, hyperlocal news startups in their communities for a year and see how it worked,” Schaffer said.

While two of the nine projects failed, the remaining seven projects succeeded.

“I think a couple of our takeaways were that the hub news organization really needs to give their partners visibility on the homepage to drive traffic to them, because they’re not paying them for content,” Schaffer said. “They’re really doing outbound links. So, you need to give them traffic as an incentive to participate in any kind of network. I think the partners, on the other hand, need to produce enough content that they get the visibility on the homepage that drives the traffic so that it’s a win-win for both partners.”

Schaffer is not only helping budding civic journalists with their startups, she’s also teaching professional journalists looking to make a mid-career leap into launching their own media projects as in instructor in a new graduate program at American University.

“This is a very innovative program that just launched in September, and American University’s School of Communication is doing it in partnership with the Kogod School of Business,” Schaffer said.

Students meet every other Saturday and one night a week for 20 weeks in this 10 course, 30 credit program.

Schaffer just finished teaching the Seminar in Media entrepreneurship class, in which students developed projects on a variety of topics, from sports apps to education and geographic-based websites.

“We realized that media ideas are coming from a lot of different places,” she said. “They’re coming from traditional journalists. They’re coming from nonprofits and NGOs [non-governmental organizations] who are now creating a lot of media products that can be commoditized, but they don’t think of them that way.”

While the idea behind the the graduate program is to help older students develop their own projects, Schaffer sees a growing need for entrepreneurship to be part of the curriculum for all journalism schools.

“I think that universities are going to undergo the same disruption that news organizations have undergone, and, as new competitors come on, much more technologically savvy, we’ll see a lot more online learning. And so, journalism schools need to figure out how they fit into that and how they can come up with creative new products, new degree programs, stackable degrees. Certificates or whatever. I think that will happen in academia. It has to happen.”

Read a transcript of the Jan Schaffer interview.

#18 – Kate Gardiner: Time for journalists to take back their audience

#20 – Love to hate the media? Download a daily dose of media criticism