In a world where everyone with a blog and an opinion calls himself a movie critic, Jason Fraley sees a clear distinction between what he does and what the average blogger does. 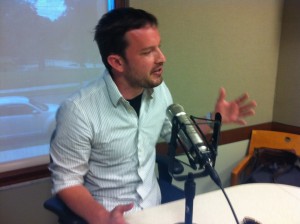 Jason Fraley is a movie critic for WTOP. He also blogs about films at FilmSpectrum.com. (Photo by Michael O’Connell)

“You get a lot of people who aren’t actually academically trained in it or maybe don’t even know their movie history,” said Fraley, a morning news writer for WTOP radio, where he also writes movie reviews. “It could just be someone who knows the last 10 years or the movies of their lifetime. I think it’s important to know what all has come before. That way, when you’re sitting in a theater, maybe more of a ‘spring chicken reviewer’ would see something on the screen and say, ‘Oh, that’s great. It’s such an original concept.’ But, if you really know your history and where things all come from, you might say, ‘Oh, that’s been done a million times.'”

Matt Razak, who reviews movies for Flixist and games for the website Destructoid, agreed that knowing your movie history is the main differentiator between the critic and the casual reviewer.

“Founding a blog, where I brought in writers from everywhere, I know what we looked for in our writers was someone who knew old movies,” he said. “Our target [audience] was 18-35 men, so the majority of our stuff is explosions and breasts. But what we wanted in a background there so that we could have interesting features along with that is someone who knows film history, who, when we ask their favorite films, didn’t just list something in the last 10 years, but had things from the golden age of film.” 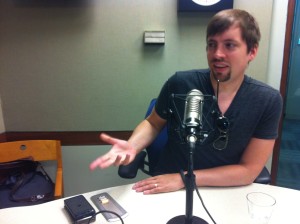 Matt Razak is a founder of the movie review website Flixist. He also reviews video games for Destructoid.

When Razak works with new writers, he encourages them to watch particular classic films. When he launched Flixist, he and the other founders of put together a must-see list.

“Not the Flixist top 10 movies, but a list of movies you needed to watch in order to understand the site,” he said. “Half of them were pre-1960 or so. The difference between someone just hopping on and saying, ‘I love this,’ is someone who will watch the classics, watch the crap, the mediocrity as well.”

Fraley described the role of the movie critic as a dual-edged sword.

“It’s a lot of fun because you’re doing what you love for a living,” he said. “I can’t imagine living without movies, so that part of it’s great. The dark side of it for people who think it’s ‘glamorous,’ sitting at home in there basement wanting to do it, it can be late nights. You go out to screenings and, at least for me, I have to get up early and write the morning show in the morning.”

Despite the strain it may cause, Fraley says the positives outweigh the negatives.

“It’s an exciting gig,” he said. “You’re almost a gatekeeper of the movies that come out and that part of it’s thrilling for me.”

For the majority of people Razak sees at screenings every week, movie reviewing is not their full-time job.

“To be a film critic, it’s a full-time job,” he said “You have a full-time job in the day and then you’re also spending another three hours three nights a week, depending on how many movies you’re reviewing, taking up time there too. So, it can be really time consuming.”

In the podcast, Fraley and Razak discuss how Hollywood has portrayed journalists. They also discuss their favorite media-themed movies and television shows.

Read a transcript of our interview with Jason Fraley and Matt Razak.