Jen Reeves started out working in traditional broadcast journalism and transitioned into the digital sphere. Currently, she is a manager of social media strategy and training at AARP, one of the largest advocacy organizations for seniors in the country.

“We talk about everything from sex to important legal and lawmaking issues,” said Reeves about the mission of AARP. 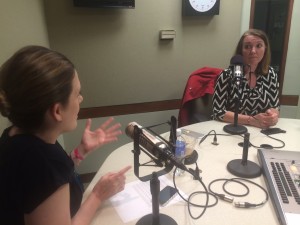 AARP isn’t exactly the type of organization that springs to mind when talking about social media or digital storytelling, but Reeves said online communication doesn’t have an age limit.

“I find that to really understand social media is to have an ability to talk about something that matters to you,” said Reeves.

Reeves said she started getting interested in social media in 2005 because her daughter was born with one hand. She wanted to find other parents and people who had a similar disability.  Eventually, she started an online community for people dealing with these issues called Born Just Right and turned her interest in digital communication into a career.

A few years ago, Reeves worked as the interactive director at KOMU-TV in Columbia, Missouri, where she started incorporating new social media platforms at the time – like Google Hangout – into a regular broadcast.

When 80 people were shot dead went off in Oslo, Norway, in 2011, Reeves’ news team in Columbia used Google Hangout to find and interview witnesses to the crime for a broadcast segment.  Google hangout enabled her local station in Missouri to easily connect with experts and interesting interview subjects internationally.

Before jumping into social media, a person should contemplate how they want to use online platforms, said Reeves.  “Sixty percent of people who use Twitter only read. They don’t interact,” she said.

In the case of professional journalists, they should consider interjecting some personality and feeling into their tweets and online presence, said Reeves. Being “robotic” about delivering the news isn’t as meaningful.

“It makes you real and it makes people want to follow your work,” she said. “Being a human and not just a robot.”

Reeves said newcomers to social media should focus on one tool and master it. “I’m a huge fan of start with Twitter. Why? It’s highly searchable,” she said. “Google will pull you out quicker on Twitter than any other social platform.”

Reeves also knows a lot of about editing high-quality, professional videos just using her smart phone. She said the biggest challenge is getting good sound on a smartphone, since the microphones embedded in the device aren’t of a professional grade.

Besides that, she uses iMovie to quickly edit the video on her phone and a tool called YouTube Capture that automatically sends the video to a YouTube channel.

Reeves also said you must shoot video with your camera sideways because the shot will turn out better.

“We, as journalists, are competing against everybody – not just the other station, the other paper, the weekly,” said Reeves. “YouTube provides content that is OK and people will watch it.”

Reeves said journalists have to think about personal branding. “You are your brand,” she said.