The story broke April 2, when John Paton, CEO of Digital First Media, announced that his chain of 75 daily newspapers was pulling the plug on its two-year-old experiment in shared, digital content, Project Thunderdome.

“We had 50-some-odd people and 95 percent of them will be leaving the company as part of this change,” said Jim Brady, DFM’s editor-in-chief and chief architect of Project Thunderdome. “So, for all intents and purposes, Thunderdome is dead. Whether the work lives on or some of the new ideas and technologies we brought into the company will live on — I think they will — but they’re going to have to be managed by the papers now.” 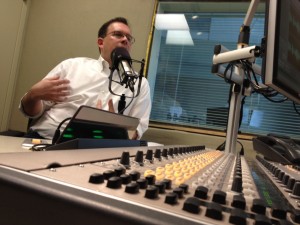 DFM launched Project Thunderdome as a way to centralize non-local news production in one location.

“If 20 percent of your effort in your newsroom is going to producing non-local stuff, obviously, that doesn’t make a lot of sense in these tight times,” Brady said “So, it was our job to help produce the national content.”

Project Thunderdome’s second role was to create unique content that could generate revenue across all of DFM’s 75 daily newspapers. It did this by producing special sections in feature areas such as health, technology and pets.

On top of that, Thunderdome acted as a resource to provide support in areas like data, curation and video production.

“When the Newtown story happened, we had a bunch of people go up to Connecticut from Thunderdome to help with editing, with reporting, with video, with social, and so, shared services was sort of a third element of it,” Brady said.

In the end, though, it was simply a matter of economics that made it easy for DFM to cut Thunderdome loose.

“From a cost perspective, times are tight and, you know, when you’re looking for things to cut, certainly one of the things that unfortunately got Thunderdome on the list was it’s not in and of itself a local property,” Brady said. “It is a fair argument to make that, at heart, Digital First Media is made up of 75 local newspapers that have to survive cause they’re so important in their communities and still drive a certain amount of revenue. And so, if you have to trim somewhere, it’s more likely to be the thing that doesn’t have a home base like the papers.”

Brady will be one of those DFM staffers moving on. He announced his departure shortly after the official word came down about Thunderdome’s fate.

This isn’t his first “noble experiment” in digital journalism and it probably won’t be his last. He had notable stints at WashingtonPost.com and TBD.com, a hyperlocal website based in Washington, D.C.

“We live in this media world in which everybody wants to declare everything a success or a failure or black or white, and it just gets so tedious at times, cause I’d like to think that there are things that we did at TBD that sites since then have taken parts off,” he said. “And there are things that I did at TBD that were parts of sites that came before that. This is all a collective learning experience here, and that step by step, we kind of get our way toward an answer that’s both good for the consumer and good for the revenue line. When somebody finally cracks that code, it’s going to be due to the efforts of a thousand different people trying a thousand different things.”

Thunderdome’s political team on knowing an audience, drones and technology