When Joanna Demkiewicz and Kaylen Ralph were students at the University of Missouri School of Journalism, the announcement of the National Magazine Awards for 2012 shocked them. 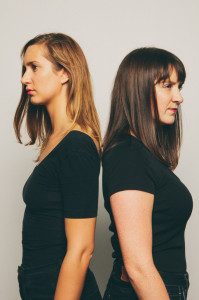 Joanna Demkiewicz, left, and Kaylen Ralph are the editors and founders of ‘The Riveter.’

“Not one woman was nominated in any of the major writing categories of the awards, so that was very frustrating,” Ralph said. “And, I think we were even more aware of it because we were sitting in a journalism class at the time that was predominately women. We pretty much texted each other in class that day and we were like, ‘OK, let’s start a magazine.'”

A second source of inspiration for Ralph and Demkiewicz was a workshop they attended promoting “Next Wave: America’s New Generation of Great Literary Journalists.”

As fans of literary journalism, they were excited about what “Next Wave” portended for young journalists, but the were disappointed to learn that only three women were included in the publication.

Demkiewicz recalled the issue of female-represenation coming up during a panel discussion at the workshop and one of the members of the all-male panel blurting out, “If you want it to happen, just go out and do it yourselves.”

That’s exactly what Demkiewicz and Ralph decided to do.

“It got us fired up,” Demkiewicz said. “We were so fired. So, we literally scooted off to the coffee shop. … We bought the url. We were like, ‘The Riveter‘, it’s happening right now, today.'”

After making that decision, the duo approached Mike Sager, one of the “New Wave” editors, who offered them support and helped them through the process.

“The Riveter” is a combination online and print publication Ralph and Demkiewicz crowdfunded via an Indigogo campaign. The goal of the magazine is to promote and empower female writers.

“We want a variety of different narratives and themes, because we want to show women as universal storytellers,” Demkiewicz said. “We don’t always have to talk about motherhood, even though one of our stories in our first piece is about motherhood. But, it is also threads in these other themes to make it a really unique piece as well.”

Ralph and Demkiewicz moved to Minneapolis after graduating in 2013 and are hard at work on the second issue of “The Riveter.”

“You cannot be afraid of doing what you think you should do,” Demkiewicz said. “That sounds really simple, but our advice that we got from that workshop when the men on the panel were all flustered and they said, ‘Just do it,’ that turned out to be the best advice that we’ve every gotten. Because, even though at first we had like this sour taste in our mouths, like “Excuses, excuses, blah, blah, blah,’ the truth is, we did have to go out and do it, because no one else has.”

#74 – Thunderdome’s political team on knowing an audience, drones and technology