John Sullivan says it’s difficult to make an investigative reporter. They just come out that way.

“There are reporters who have this incredible desire to get to the truth no matter what the personal cost is, as far as time and effort and energy,” he said. “Certainly, they’re not crusaders, but they just have this unquenchable curiosity about what is really going on here. They are very smart about how they see the world and these problems. I mean they have this kind of instinct about how the world works and people relate to each other.” 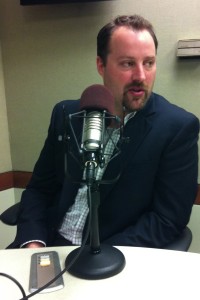 Sullivan is a Pulitzer-Prize-winning investigative reporter. He was part of the The Philadelphia Inquirer‘s team that won the public service prize for a series of articles about the under-reported school violence in the Philadelphia school system.

One of the keys of what makes an investigative reporter is the objective of their work.

“We look for wrongdoing,” he said. “We look for harm. We’re analyzing a problem. We’re trying to determine what is the true state of this agency, and so we’re usually trying to determine, ‘Is there something wrong here?’ And, I think a lot of reporters do that, but I think a lot of reporters also do lots of other types of stories too. Investigative reporters focus mainly on those things.”

Investigative stories have a degree of scope, as well, and reporters tries to reflect that in the work they do.

“What we try to do is recognize that most problems are fairly complex and that it’s easy to have a knee-jerk reaction and say, ‘This is bad,” Sullivan said. “But we try to understand, kind of, why is it not working this way? Is it incompetence, is it corruption or is it just basically good people, working hard to try to figure something out that’s really hard to figure out?”

Recently, Sullivan was jointly hired by The Washington Post, American University and the Investigative Reporting Workshop.

“What we tried to do here was try to develop a journalism program that would allow students to do high level, high quality work in a working publication — The Post — and to also take a class at the same time at American University, get credit for this,” he said. “And so, we’ve developed this essenstially a practicum, like an internship program, where graduate students work on the investigative team at The Post several days a week and they work with me on my stories, or with any of the other investigative reporters on their stories. And they get credit for that.”

Students learn about “the process” of putting together an investigative piece of journalism with hands on experience, rather than following some artificial structure put together by a professor.

“They get a chance to work in a 10 person investigative team, where they get to watch all the other stories develop, talk to the reporters about how the’re doing their stories and then work on stories that we’re working on,” Sullivan said. “We don’t guarantee them that the story will be completed by the time the semester’s over. And, we don’t guarantee them that they’ll get bylines, although we hope that they do and we want them to. And we want them to contribute significant reporting.”

One investigation leads to another

The Pulitzer-Prize-winning Inquirer story came out of work Sullivan was doing about child protective services in Philadelphia.

He did a project with Ken Dilanian, who’s now the national security and intelligence reporter for The Los Angeles Times, about children being beaten to death after their families came under the scrutiny of child protective services. That story led to an overhaul of the system, the firing of two offiicals and the criminal indictment and conviction of 18 people for the death of a 14-year-old girl with cerebral palsy, Danieal Kelly.

“I got a really good view into that system and I realized that there were many systems that children in Philadelphia, all the time, were basically in one of these three systems and seldom did one system know about what the other system was doing,” he said.

A year later, he was covering a Philadelphia hospital as a medical reporter and began seeing children coming into the emergency room with gunshot wounds. Investigating further, he found that some of these children were suspended from school from 30 to 50 times and had received multiple interventions.

“I started trying to figure out, ‘How can I describe all the intervention that goes into turning around a child, who is now 15 and who’s lying on this table or who shot this kid?'”

That led to Sullivan and a team of reporters to begin their investigation into violence in the Philadelphia school system and the effect it had on the students in that system.

“I think the problem I had with the previous series is I felt it didn’t really let people know what it was like to be a kid in those schools,” he said. “I felt like they let you know what it was like to be a teacher getting punched out by a student, but it wasn’t what are the 19 kids in this class who really want an education doing when these two kids are fighting? And that’s really what we wanted. Or what’s it like to be the victim of violence as a student? How does it weigh on your ability to get an education?”

The key element to that series’ was incorporating the “human element” that allowed readers to connect with a story’s subject. Sullivan pointed to a video of a girl reading a poem she had written about being assaulted as an example of this.

“It’s not as violent or as serious as some of these other incidents, but that’s just not true to this 10-year-old girl,” he said. “That’s what makes people understand it and makes it impossible for them to dismiss.”

Read a transcript of our interview with John Sullivan.