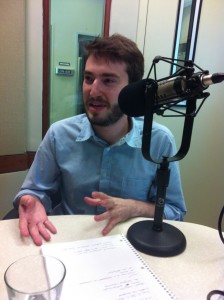 “It’s journalism in the form of comics,” said Kramer, founder and editor of The Cartoon Picayune, a biannual digest-sized magazine with black and white artwork and color covers. “Different stories that are all about real people and true stories, but in the form of a comic book.”

Although Kramer had occasionally drawn pictures when he was younger, he’d never serioiusly considered becoming an artist.

“I always liked to draw, but I never had the knack for it,” he said. “I was never one of those kids who had to be doodling all the time compulsively.”

He was a journalist first, starting as a graduate of The American University.

“I did undergrad in their School of Communications and just thought I was going to go into normal journalism just like everyone else thought they were going to,” he said. “But, I was also a comics fan and I loved picking up my weeky books and reading graphic novels and everything.”

Kramer’s “a-ha” moment came when a friend returned from Croatia and handed him a copy of “Safe Area Gorazde” by Joe Sacco.

“It’s a very complicated story in comics form about all the recent history in the Balkans,” he said. “It kind of opened my eyes to the possibility of telling non-fiction stories in the comics medium. From there, I kind of started thinking about how I could tell the journalistic stories that I like, things like ‘This American Life’ is a great example. How could I do that in comic books?”

Sacco’s book inspired Kramer to pursue the other side of his career. He applied to The Center for Cartoon Studies in White River Junction, Vt. 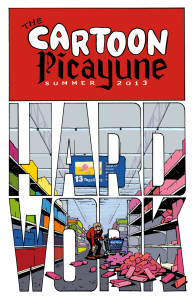 The fifth issue of The Cartoon Picayune, dated Summer 2013, focuses on the theme ‘Hard Work.’ (Image courtesy of Josh Kramer).

“It’s an amazing two-year MFA program that basically allows you to take time off from the world and go make comics,” he said.

The first issue of The Cartoon Picayune grew out of Kramer’s second-year thesis project he developed with classmates and his adviser Josh Neufeld, author of The New York Times bestselling non-fiction graphic novel “A.D. — New Orleans After the Deluge.”

After graduating, Kramer moved back to Washington, D.C., where he has continued publishing the magazine, writing and illustrating stories and bringing in other contributors. The latest issue, dated Summer 2013, contains stories on the theme of “Hard Work.”

“I’m really happy that The Cartoon Picayune is at a point where I can pull in people who can draw better than me,” Kramer said. “But I still like to do my own work and I feel like I’m a great example of the fact that anyone who is willing to do it can learn to draw in a few years.”

Kramer applies his artist’s eye to the journalistic process of reporting and telling a story.

“Every story starts out the same,” Kramer said. “You go out. You meet people. You interview them. You take notes. In my case, I take a lot more visual notes. I’m taking a lot of pictures for reference. I’m telling people, ‘Don’t worry about these picture, I’m not going to use them for anything. It’s just for my own notes.’ But, I am reporting the story like anyone else. I’m looking for good quotes and I’m pursing it in that way.”

In his role as an editor, Kramer not only has the opportunity to create his own work, but it gives him a chance to collaborate with others. The latest issue of The Comics Picayune features a story called “Sex Workers of the World Unite!” by artist Andy Warner.

“What was really great for me in this piece is I had a budget to pay him
and to make it worth his while to go out and report,” Kramer said. “He had never actually had the time or the inclination to go talk to people, record those conversations and try to put a script together and make a comic out of
that. That is huge for me, that I have a budget to do that with.”

Read a transcript of our interview with Josh Kramer.