WASHINGTON – Practicing the tenets of free press in a newly free country was a whole different experience for a young journalist and previous guest of It’s All Journalism. 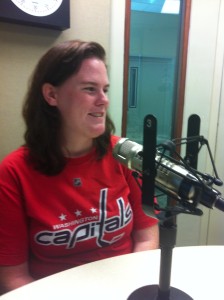 Julia O’Donoghue joined us a few months ago on the podcast as a guest producer and has just completed a trip to Johannesburg, South Africa working for Business Day. O’Donoghue is a graduate of Northwestern’s Medill School of Journalism and a participant in the school’s global scholar program.

She says one of the first things that struck her about the difference in reporting in that country is how its political history altered the perspective.

“South Africa’s only been a democracy for 19 years,” she said. “It’s really only had a free press since 1990. Before that, it was heavily censored. The Apartheid government didn’t let the press report on a lot of things … . So, I was pretty impressed with how professional and how much like the American media that was.”

The biggest story to break while she was in country was the domestic violence case involving Olympic athlete Oscar Pistorius. O’Donoghue says the aftermath of the case generated interesting discussion both in the media on the air and in the newsroom. “On things like drive-time radio. They were saying things like, ‘How do we relate to each other better as men and women?’ There were pretty serious discussions around that front, which was interesting because, I think, sometimes that situation of violence against women in South Africa doesn’t necessarily get talked about if it’s the whole community. Sometimes it’s relegated to a issue in the black community,” O’Donoghue said.While there, she interviewed another journalist to better understand the country and it’s approach to free speech.O’Donoghue interviewed Anton Harber, the founder of the journalism program at the University of Witwatersrand. Harbor is also the editor and founder of the Mail & Guardian newspaper.”It was an anti-Apartheid newspaper under Apartheid. It got shut down a couple of times. It was sort of — he called it “alternative press.” It’s not quite like our alternative press, but it was operating in a way that was angering the powers that be,” O’Donoghue said.Our podcast includes O’Donoghue’s interview Harber, in which he talks about the difficult transition his country endured over the past two decades as it tried to establish a free and open press.— Megan ClohertyRead a transcript of our interview with Julia O’Donoghue.

#39 – ‘Connecting dots in the dark:’ LinkedIn expert shares his tricks for reporters