Social media is not a fad.

Kate Gardiner, a New York-based journalist and social media consultant, said journalists need to recognize that truth and continue to use social media to build communities online where they can better serve and interact with their audience. 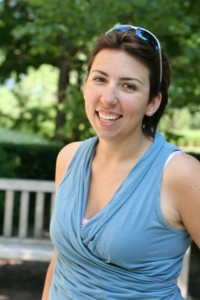 Kate Gardiner, shown here in 2009, is the founder of Distill Media. (Photo courtesy of Insider Chicago)

But Gardiner has one caveat.

“I think that we have to start driving our audience back to our freaking websites, though,
because we have managed to put ourselves in an awkward position in terms of Facebook, where we’re paying to play with people who were our consumers in the first place. We kind of give them to them,” she said.

Gardiner came to journalism and social media in particular in the midst of the “Great Recession,” first as a student at Medill School of Journalism at Northwestern University, earning a degree in Interactive Publishing and Urban Affairs reporting. She also received at Certificate in Media Management from Kellogg School of Management.

She went on to help hyperlocal outlets like The Molokai Times and the Chitown Daily News and global media companies like Al Jazeera International find their social media voices and develop web strategies to reach their audiences.In 2010, Gardiner started Distill Media, Inc., which advises companies like WNYC and CBS Interactive on their social media strategies.“I would say that I have a preference for non-profit media and public media, if given the option,” she said.What’s to like about social media“It is, honestly, the only thing that’s faster than breaking news,” Gardiner said, of her love of social media. “And so, that’s always been very, very engaging and something that pulls me back to the newsroom every single time I think about going someplace else and doing something different.”Among the benefits for journalists who use social media are the repeated interactions they can develop with their community, she said. Those interactions can lead to a greater impact for news outlets and growth in their Web statistics.Social media does have its downside, though.“Instead of thinking creatively, some of us have started to pander to our audiences and that has led to a little bit of a decline in the quality of content,” Gardiner said.“It’s also become really ‘me too,’ which means that everybody’s on it and it’s not as innovative. It’s not as creative.”As the Internet becomes more stable and its “wild west” aspects begin to vanish, journalists can expect to see more controls being put in place on how content is reaching readers. This will reduce the ability of some to experiment.“It’s the diversification of audience,” Gardiner said. “It’s the realization that social media is in fact important and impactful in a way that no one really expected it to be. It’s the realization that social can also highlight your failings. It kind of showcases the best parts of your organization and highlights the weaknesses in it.”That being said, social media is not going away and its value is daily becoming more recognized.“Being active and engaged in social can only help a young company, and being active and engaged on social can only help and encourage specific programming initiatives,” Gardiner said. “It’s also really important so that if in a crisis situation you have channels engaged and open to really reach out to the community of people who are either dependent on you, interested in you or who are going to support you through that crisis whatever that might be and however big that might be.”Social media that worksGardiner points to WNYC as one of the companies she thinks is doing a good job integrating social media into the work it does.“I really liked what WNYC did during Sandy,” she said. “That was actually authored by Caitlin Thompson, politics editor. And I really enjoy what PBS NewsHour has done over its last four or five years.”Other media outlets Gardiner considered to be doing good work included the Huffington Post, in terms of its social and digital distribution strategies, and BuzzFeed, for the way its authors and editors interact with their audience and encourage participation.“Another one that’s kind of fun is The Verge, primarily because of what they’re doing in terms of audience experience onsite, in addition to just the decent creation of content,” she said.As far as solving the “Facebook conundrum” goes, Gardiner said journalists still have a long way to go.”I don’t know if news should’ve built Facebook, but we should’ve been more innovative about it in the first place, and now we’re playing catchup,” she said. “News is always playing catchup. So we’ll see what happens.”— Michael O’ConnellRead a transcript of the Kate Gardiner interview.