During his 44-year career at The Washington Post, Leonard Downie Jr. oversaw many important investigative stories, from the Watergate break-ins to mismanagement at Walter Reed Army Medical Center.

When Downie stepped down after a 17-year stint as The Post‘s executive editor in 2006, one might think he would retire and leave journalism behind. Instead, he has continued to give back to the media industry through various foundations and journalism organizations.

With Sara Rafsky, Downie recently wrote a special report for the Committee to Protect Journalists detailing a lack of transparency within the Obama administration.

As a Weil Family Professor of Journalism at the Walter Cronkite School of Journalism and Mass Communication at Arizona State University, Downie is one of the instructors at News21, an initiative started by the Carnegie Corporation and the Knight Foundation to promote professional training at several journalism schools around the country. 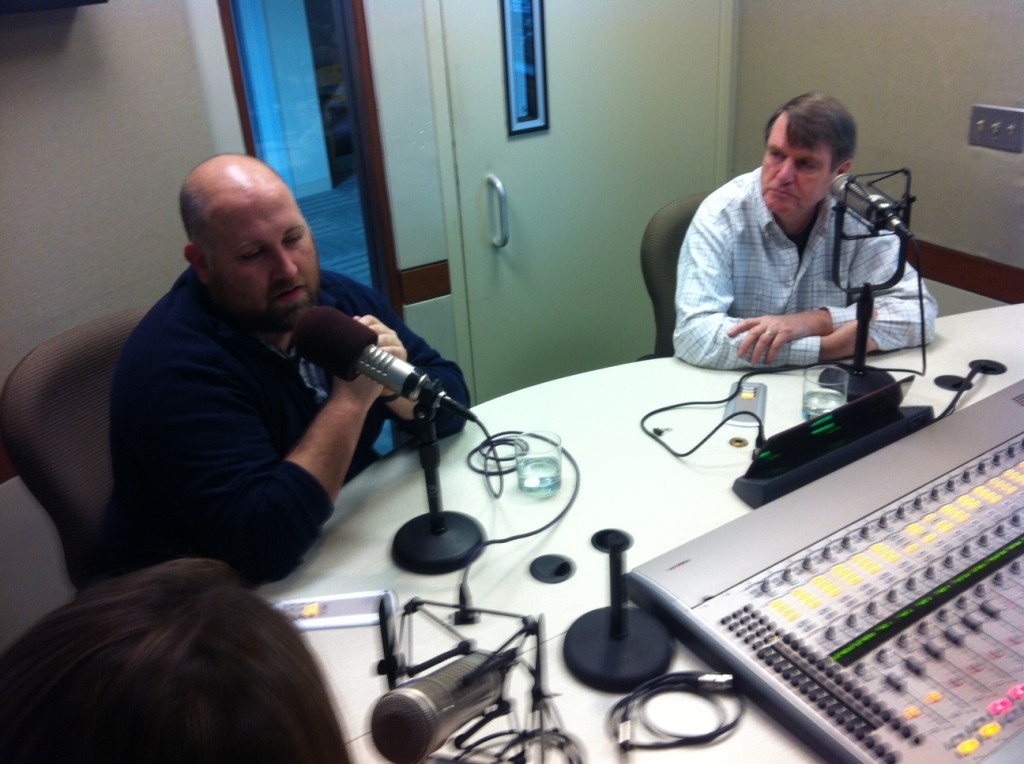 From left, Chad Garland and Len Downie Jr. talk to It’s All Journalism about the News21 project: Back Home — The Enduring Battles Facing Post 9/11Veterans. (Photo by Michael O’Connell)

A new seminar takes place each spring, in which a group of advanced students receives instructions in intestigative reporting techniques and plan a multimedia project to be posted online later in the year. Each project is built around a theme. This year it was veterans returning home from war and the services they receive.

“Next year’s topic, which is gun legislation in the state legislatures around the country, another timely topic that the rest of the news media cannot cover adequately enough because they simply don’t have the resources that we’re going to have,” Downie said. “We’re probably going to have 26 reporters all across the country, a number of the them at the Cronkite School, but a number of them, at least 20, at other universities literally from coast to coast, from Florida to Oregon. They’ll all participate in the spring seminar by teleconference, during which we will do research for the project.”

News21’s 2013 project — Back Home: The Enduring Battles Facing Post 9/11 Veterans — contains 26 stories and more than 50 multimedia pieces, ranging from photos, videos to a 26-minute television documentary produced by the students in the program.

“We launch our own website that has everything on it and then all of our partners can use whatever they want to use, which they did last year through September and October,” Downie said.

Part of the goal of News21 is to supplement the coverage of news organizations that don’t have the resources to conduct such a large-scale investigative project.

Chad Garland, an older student with an interest in business journalism, has been a veteran since 2002. When heard about the topic of this year’s News21 project, he knew he had to get involved.

“I knew when I was applying that I was one of the few people that had veteran’s experience,” Garland said. He used that experience to become an investigative reporter, focusing on charities that were not what they professed to be.

This type of project, where journalism education intersects with professional training, is something Downie thinks more journalism schools ought to be doing, not only to help their students but to foster the future of investigative reporting.

“There are still a relative minority of journalism schools engaged in this kind of professional journalism with state news agencies as some schools have,” he said. “The Cronkite School has a Washington bureau for all the news media in Arizona, staffed by students. American University has the Investigative Reporting Project that produces professional level work. This is what I think journalism schools should be doing across the country.”

Garland agreed. “News21 was a way to get that real world, multimedia journalism experience that I hadn’t had outside the classroom,” he said.

Investigating for big production: Showtime teams up with the Investigative Reporting Workshop