A lot of people hate the media. That’s proved to be something of a boon for The Daily Download, the news and media-criticism website.

“We’re scum of the earth to a lot of people, so those are the people who like to read this,” joked Lauren Ashburn, the website’s founder and editor-in-chief. 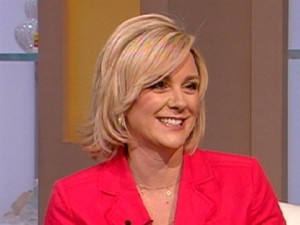 “We find that a lot of people in the industry who are at big jobs, they want to make sure they know what’s being said and who’s being criticized,” said Ashburn. “And so, that’s where a lot of our audience comes from. It comes from New York, Washington and L.A. But, there is a significant part of the middle of the country and regular folks who really hate media and want to weigh in on their mistakes.”

What has helped to drive traffic to the site — it has 700,000 unique visitors after just six months — is its ability to function as an equal opportunity offender of sorts, straddling the political fence with stories that rankle the rank and file of both the right and the left.

“One of the stories that did really well for us was by one of our columnists … David Zurawik, who’s the Baltimore Sun TV critic, and he did a piece for us talking about why Chelsea Clinton was a terrible journalist and why she was a ‘pretend’ journalist,” Ashburn said. “Matt Drudge’s site picked it up, and it just went on fire. Obviously, Drudge picked it up because he has the … right wing bent.”

Another story that generated traffic to the site was Ashburn’s article about how Secretary of State Hillary Rodham Clinton was getting bashed by Fox News for her alleged bout of “Benghazi flu.” All the left-leaning websites picked that one up.

“That’s good for our traffic, actually, because we get it from both sides,” she said. “I get called a Republican shill and I get called an elitist Democrat, but I feel like that’s when we know that we’re doing our job, when we’re holding the media accountable.”

Filling a need for media criticism

A former executive at USA Today and Gannett, Ashburn launched The Daily Download with the help of a two-year grant from the Knight Foundation.

“I felt like their was a void in the marketplace, when it came to media and media coverage and media criticism,” she said. “Plus, there is just this wealth of information out there that isn’t curated and there’s so many cool tools and so many cool new, social media sites and apps, and so many things that nonprofits are doing that I found it was hard to know what was good, what was bad, what was even out there.”

Beyond its media criticism, The Daily Download also reviews new technology, Web tools and other websites. This coverage is augmented by short videos Ashburn produces with former Washington Post media critic Howard Kurtz. These shorts appear daily on the website and on PBS stations across the country.

“What we found with Daily Download is that there’s never a problem writing about new things,” Ashburn said. “There’s always a new site. There’s always something that mainstream media is trying to do to catchup to Silicon Valley. There’s just a lot of information out there. So, we’re never at a loss for something to cover, for something to talk about in those videos.”

Ashburn is quick to praise Kurtz for his contributions to The Daily Download’s mission. “He always has great insights and we’re lucky to have him,” she said. “He has his experience. The thing I like the most about his writing is that he’s fair, and we try to be fair. As I said, we do pieces that are on both sides. We’re equal opportunity critics and his pieces really bring a depth and a context that nobody else can bring.”

A glance at The Daily Download’s navigation bar reveals one topic that’s not often featured so prominently on media-focused website — Women.

“Women is a big thing for me,” Ashburn said. “I interview a lot of women about their role in media, but also their work/life balance, because I think a lot of women across the country would like to hear ‘How do you do it all? Can you do it all?’ … That, to me, is a really important part of the journalism discussion that I don’t think gets as much attention as it should.”

Ashburn has interviewed Betsy Fischer, executive producer of Meet the Press, and Cathy Merrill, publisher of The Washingtonian, about how they are able to balance their family life with the demands of their careers.

“I struggled a lot with that issue until I launched my own company, Ashburn Media Company, and then we put out Daily Download,” Ashburn said. “I was working out of my house, but it was so fabulous to be able to to do that. I mean, I’m really lucky to have that opportunity. … I think a lot of women, whether you’re a journalist or not, but particularly if you’re a journalist with the demanding schedules and the on-call nature of it, you don’t know when a Newtown shooting is going to happen and you’re going to have to just pick up and go.”

After six months of running The Daily Download, Ashburn has learned a few things about working in an online environment. The number one takeaway has been how mean-spirited the discourse can sometimes be.

“While I had this mission, I didn’t realize that it would be so much more negative than just writing a story, talking about it and going on TV, as I do, to talk about the things I write about or do,” she said. “There is this tenor on social media that can be really nasty.”

Ashburn isn’t talking about the usual snarkiness one might encounter on Twitter or a comment board. She’s had death threats. “I did a media commentary on The New York Post,” she said, “when it ran the front page cover of the man who was hit by the train … and people said, ‘Why don’t you jump in front of a train?’”

This negativeness, while unpleasant and sometimes surprising, has not diminished Ashburn’s affection for social media and the ongoing dialogue that’s taking place online.

“That’s what I love about social media,” she said. “Everybody can weigh in. Right? It’s not the editors who report to the public. Everybody has a voice and I love that as a believer in the First Amendment, as a journalist.”

Read a transcript of the Lauren Ashburn interview.