Artist and journalist Michael Cavna entered daily syndication in late 1996 with his topical comic strip “Warped.” For seven years, he sat at the drawing board every day producing the strip. 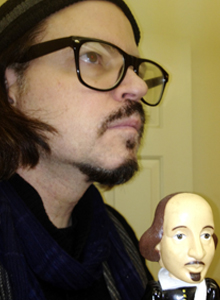 At the time, the American comic strip was still considered something of a going concern, but things were in the process of changing.

“In 1995, you still had ‘Bloom County,'” Cavna said. “You still had ‘Calvin and Hobbes.’ You still had ‘The Far Side.’ Within roughly a 12 month period, all would disappear from the landscape. … Once those quickly in the mid-’90s all disappeared, it was a radical shift.”

Although other strips, such as “Doonesbury, “Dilbert” and “Zits” continued to thrive, the departure of those three influential strips left a huge gap in the comics sections of the nation’s newspapers.

Cavna folded “Warped” in 2003, partially because he’d said all that he wanted to say artistically, but also because it was becoming more difficult for artists to expand their audiences through newspaper syndication.

“I talked to Garry Trudeau about it,” Cavna said. “Even when ‘Doonesbury’ was syndicated in 1970, he felt like the ebb had begun. But the radical shift has been the decline of print readership. So, we’ve really seen in the past couple of decades that drop off as you’ve seen circulation drop off, as you’ve seen two newspaper towns become one newspaper towns. That’s all endemic.”

Since folding “Warped,” Cavna has continued his connection with newspapers as a writer and editor. Currently, he writes the weekly comics and graphic novel column Comic Riffs for The Washington Post.

Cavna is a also a member of Team Cul de Sac. When cartoonist Richard Thompson was diagnosed with Parkinson’s disease, artists from around the world contributed to a book project in support of Thompson.

Cavna wrote about the project for The Washington Post and his article formed the basis for the text portion of the Team Cul de Sac book, which is still available for purchase online. With the help of a matching grant from the Michael J. Fox Foundation, Team Cul de Sac has raised more than $100,000 for Parkinson’s research.

“I got into journalism and cartooning because I thought I’d ride two horses,” Cavna said. “I’ll be an editor and a writer, and I’ll be a comic strip cartoonist in general. If I have two horses and one horse dies, I can jump on the other one, almost like Butch Cassidy and Sundance.”

What Cavna eventually realized, though, was that he wasn’t really riding two horses. Because of the decline of newsprint and print readership, he was really just shifting around in the same saddle.

“Both industries, which are inextricably linked are still wrestling with how to live in a digital world,” Cavna said.

Read Michael Cavna’s article about comics in the classroom: THE TRIAL BALLOON: O teachers, after a banner year for graphic novels, don’t ban these books.