Michael LaRosa‘s interest in politics came at a young age. His first politics-related memory is of a placemat his parents put on the dinner table showing all of the U.S. presidents. He quickly mastered all the names and was happy to share that knowledge with classmates and teachers.

“It morphed into the interest in government and politics,” he said. “I memorized them at a young age. I started watching CSPAN. I remember some of my earliest memories coming home from fourth grade and watching Sen. Ben Nighthorse Campbell (R) from Colorado switch parties. It was right after the ’94 election. I was a real junkie at a really young age. Politicians were and still are celebrities to me.” 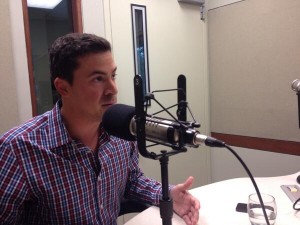 After studing political science at Seton Hall University, LaRosa landed an internship on then Sen. Hillary Rodham Clinton’s (D-N.Y) 2006 reelection campaign. There he learned firsthand about the day-to-day activities of a campaign, from fundraising to event planning.

LaRosa went on to serve as a personal aide to former Rep. Melissa Bean (D-Ill.), scheduler for Sen. Kirsten Gillibrand (D-N.Y.) and special assistant to the deputy director of the Office of Personnel Management.

Those jobs set him on a path to his current job as segment producer for MSNBC’s Hardball with Chris Matthews.

“That intersection of where the media and politics exists always fascinated me, I think,” he said. “The presidential campaigns were a big part of that. The 2008 and the 2004 campaigns were the moments, for me, when I realized I was kind of interested in the message that was coming across to voters, whether it was through the campaigns or the media. I wanted to be a part of that someway.”

About the time LaRosa was thinking that, Matthews was looking for a political junkie to help on his show.

“We’re both political junkies from Pennsylvania and we kind of hit it off,” LaRosa said. “He’s taught me a lot since then. I had a lot of practical experience going into journalism about politics, but I had to learn TV and learn journalism. I feel like I thrive on it. I really enjoy living and breathing politics in a way that you can’t do in the government.”