WASHINGTON – It’s a Herculean task: Leaving journalism to apply the tenets of the field to a new sphere. In Washington, hundreds of journalists find great jobs at government agencies hoping to adopt a journalism-mindset in their communications.

For long-time journalist Rob Roberts, a video and multimedia expert, his new digital playground is at the Department of Energy. 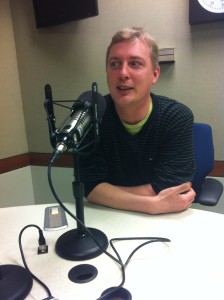 Read a transcript of our interview with Rob Roberts.

After a career in newspapers including USA Today and the Raleigh News & Observer, jobs in online Flash design and a stint with a government agency operating from the White House, Roberts is the director of digital strategies for the DOE and runs Energy.gov.

“It’s interesting now because in the government space, I see a lot of what excited me about journalism 10 years ago. When I was at Raleigh, we were always watching what The Post was doing and what The New York Times was doing and saying, ‘How can we do it? That’s cool’ … Especially among the agencies that are starting to understand the Internet and starting to understand what they want to be doing as part of a digital strategy, we see that same level of competition where we’re looking at what State’s doing or we’re looking at, especially what the White House is doing, and using that as kind of a way sort of uping our game,” Roberts says.

While Roberts says it’s exciting to take on the challenge of branding the Department of Energy both online and on social media, he says it’s a lot of work to convince a previously formal agency to loosen up and do something as simple as responding to questions on Twitter.

“I think people want to know you have a personality. I think they really want to know that you care about these issues and it’s we want people in our office who are passionate about the subject, who go home and read about renewables, who go home and are interested in hard-core science and partical accelerators and things like that. And I think it’s important that we convey that we’re interested in these topics,” Roberts says.

As a journalist, the questions of transparency comes up for Roberts who says he wants to make data available, not only on a platform so it’s easily digestible for journalists but for the public as well.

“We come in and it’s like we’re endowed with these ideas of transparency and openness. We know what the potential is when we have data and access to information. We try to, at least I try to, continue that in our work in the government. ‘Can this be open? Should this be open? Is a .pdf file with all these obscure charts and graphs that were made in Microsoft Excel the best way to present the information or should we just put it out as a dataset and let people know that it’s out there,'” Roberts says are questions he runs into at the Department of Energy where he’s been for six months.

While government agencies are working to create profiles online and on social media, Roberts says Google + is a platform bureaucrats are embracing.

“The Google Hangout has the potential, I would say, to revolutionize the way that we’re interacting with an audience. But NASA just trumps us every time. We did a Google+ one day. I forget the topic. I think it was about women in science. And it was well received and we had a good conversation and things like that. The next day NASA does the Google Hangout from space. We’re like, ‘Oh, yeah.’ They just take everything that we do and do it from space,” Roberts says. But he concedes that healthy competition motivates his colleagues at the DOE, just as it would if they were competing with another newsroom.

While building a well-rounded team to communicate for an agency or newsroom is essential, Roberts sees too little appreciation for video training. It’s a skill that takes a while to hone, Roberts says, and just because someone has the ability take video does not mean it’s video that should be used.

“A big mistake that newspapers, I think, made when, and are still making, when they tried to make “everybody’s capable of doing video decisions” is that they would typically have the reporter shoot and then hand off to a multimedia producer and an editor to actually edit the piece. As someone who did this quite a bit, who received this footage quite a bit, it was terrible. And it was like stuff we couldn’t work worth. And it had been stuff that we instructed them about in these five shots and shooting closeups and shooting b-roll and that sort of thing. But, because these people didn’t have to edit it, they never learned,” Roberts says.

To learn how to shoot, you have to fail a number of times, so the videographer can realize what he’s doing wrong and correct it in the field.

There is undoubtedly a pressure to perform and have a multitude of skills at your disposal, whether in journalism or in another field. Roberts says he found that pressure daunting, especially given that technology is constantly changing.

“It’s like there’s this constant pressure to evolve and this constant fear of being left behind. And you know, in some ways, it’s empowering and it’s like exciting to learn all these new things. But other times it’s intimidating, especially when you’re in a work environment where you’re producing daily stuff and you’re still having to think long-term about where the technology’s going and how things are going. And things change immediately and it can be difficult for people,” he says.

But Roberts feels confident about where journalism is headed for the most part, especially when he thinks of the students he works with coming out of American University and other journalism schools, eager to contribute.

“I think there’s a number of schools that are hitting it out of the park with some of the students they have coming up. Like visual journalists coming out of Ohio University are amazing. Some of the data journalism and interactive journalism that they’re doing at my alma mater, North Carolina and places like that or Berkeley are staggering, really pushing the envelope of what we used to do like five or 10 years ago … A lot of the talent we’re seeing, especially in the data sphere, it’s this hybrid of open source guys who can bounce between a startup kind of place to a non profit kind of place to a journalism kind of place. I think that’s paying dividends for the industry right now.”

Read a transcript of our interview with Rob Roberts.