What Brian Boyer does has many names.

Some people call it computer assisted reporting. Some call it data journalism.

“When I got into this game the name that was being thrown around was programmer journalist,” he said. 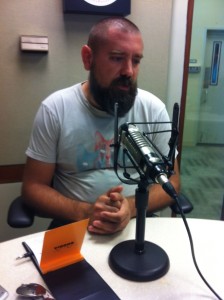 On his website, Boyer calls himself a hacker journalist.

“The word hack, hacking, is not a negative term in the programming world,” he said. “It’s a term of endearment. So calling yourself a cool guy, or something.”

Boyer is the news applications editor at NPR.org and project manager of the Panda Project, a newsroom data library application that helps newsrooms store and search their data sets.

He considers himself an exception to the rule — software developer first, journalist second — but a storyteller nonetheless.

“We program in the interest of journalism,” he said. “Just like a photojournalist takes photographs. We don’t write written pieces. We ask, ‘Who’s our audience? What are their needs?’ And then we think about what to build. Everyone wants the big engineering project, the most beautiful design or the most compelling story. We tell stories, but we’re always trying to address the needs of our users first before we decide what story to tell.”

Despite the natural fit, journalism was never really on Boyer’s radar.

He studied computer science and was working in the start up scene in Chicago for various consulting companies and development shops, building software for lawyers and banks.

“I was thinking about going back to school and studying law or getting a degree in public policy, because I wanted to do something more socially conscious with my skills,” he said.

While contemplating his next career move, Boyer came across a blog post on boingboing that said Northwestern University was giving scholarships to programmers looking to study journalism.

He Googled the word journalism and read The University of Missouri’s The Journalist’s Creed.

“It just seemed it was like what I was thinking about,” Boyer said. “Law and policy were sort of making the world a better place from the top down and journalism was the opposite. It was from the bottom up, which was way more fun.”

After graduating from Northwestern’s Medill School of Journalism, Boyer took an internship at ProPublica in New York City. About halfway through, he got a phone call from the Chicago Tribune. They wanted him to start the paper’s first news applications team. He put together and led a group of data journalists, designers and developers there for just over three years.

“The work we did was mostly hard news,” Boyer said. “Our mandate was to work with the politics team, with investigative mostly. We did some work with business. Our mandate was fuzzy besides who we were going to work with. No one really said ‘Hey, you have to make this kind of website or that kind of thing.’”

Mobile First: Reaching your readers where they’re at

At NPR, the news applications team has this statement about its work: We take data and build useful things with it.

“You might read a story in the newspaper or hear it on the radio about schools,” Boyer said. “They’ll cite three anecdotes, talk to a couple parents and the person reading it says, ‘What about my kid’s school? What about my neighborhood?’ On the Web we can talk directly to anyone’s individual personal story. … That’s when a news app really works.”

Boyer has been a programmer his entire working life. With journalism it’s not so much about the technology, but creating a functional and informative end product that is the challenge.

“Even for people who haven’t been programming that long, programming is not the hard part,” he said. “The hard part is design. And not just design like graphic design. Design in a holistic sense. It’s figuring out what the right thing to make is.”

For Boyer, usability is where the design process starts.

“To me, mobile is about meeting people where they’re at,” he said. “We did a project at the Tribune where we researched building a new mobile version of our website. And we realized we didn’t need to cram our website in a smaller box. We realized the goal was to reach people in bed, to reach people on the bus, when they’re on the toilet. We reach people in the cracks of their day, their moments in between things. Because that’s how we consume media.”

When working on a new project, the first thing Boyer and his team at NPR design is mobile version and then stretch it out to fit the desktop. He finds it’s essential to embrace constraints.

“You need to set up parameters and then work within those parameters,” he said. “Mobile design is sort of a great mind hack, right? If you’ve only got 3 inches tall, 2 inches wide, it forces you to prioritize.”

Boyer said that if it doesn’t work on mobile, you’re missing an audience, an important and underserved audience.

According to a recent report by Pew, Smartphone Ownership 2013, more than 50 percent of the U.S. population regardless of race is using smartphones to access the Internet. Smartphones are reaching the proverbial digital divide right now, Boyer said.

Given these statistics, Boyer has high hopes for what’s to come in the industry.

“Everyone gets pretty doom and gloom,” he said. “But this is our opportunity to rebuild. This is a chance to create something new and different and invent a medium. We’ve barely scratched the surface of what is Web-native storytelling. This is just an exciting moment and I’m really geeked to be here.”

Read a transcript of our interview with Brian Boyer.