WASHINGTON – Bethany Swain found her love of photography when she realized at a young age taking someone’s photo would make them smile. Now, she is one of the most highly acclaimed photojournalists in the industry. After recently leaving CNN, Swain is now teaching photojournalism and multimedia at the University of Maryland.

Swain says one of the things she teaches her students is how to take a non-visual story and make it their own.

“Be excited about the little victories, because yeah, there are a lot of stories that don’t take it to that level of something that you want to put on your resume reel or are really excited to post on Facebook for all your friends to make sure they see. But again, that doesn’t mean those stories aren’t worth telling,” Swain says. 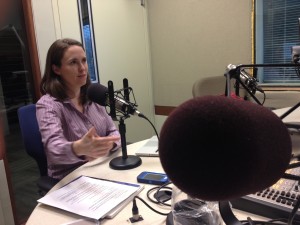 Former CNN photojournalist Bethany Swain tells It’s All Journalism about covering Sarah Palin’s campaign and NATO troops in Afghanistan, as well as how to tell a good visual story. (Photo by Megan Cloherty)

Even after years of experience, Swain still bounces ideas she has for stories she’s headed to with mentors and colleagues. She also checks in with groups like the “storytellers” on Facebook to see other photojournalists’ work and draw inspiration from them.

“By taking a step back … and just taking those couple of hours into watching and taking a break back from those deadlines back from the rush and feeding the beast. You’re like, ‘Wow, that was beautiful. That was a different way of doing it,'” she says.

Swain says some of the biggest mistakes students or photographers new to video make are not holding a shot for a full 10 seconds. They also don’t wait until the action ends and are usually unaware of what’s going on outside the frame of the shot — all of which come with practice, she says.

However, part of teaching journalism in 2013 requires an understanding of technology’s influence on the requirements and demands of the job.

“The skills that you needed five, 10, 15 years ago are very, very different. One of the things I talk about in my classes whenever I can is a list issued by Poynter Institute: The 25 essential skills for today’s journalism students,” Swain says. Here’s the list posted by College Media Matters.

“Some of them are things that have been the same. And other things: mapping and geo-tagging, real time reporting, social media engagement. That’s new. I mean even five years ago, they might not even have been part of the conversation,” she says.

But Swain emphasizes for her students, focusing on the principles of the job and the skills she learned at the beginning of her career are still relevant.

Swain has been on many adventures through her career, including covering Vice Presidential Candidate Sarah Palin’s campaign and heading to Afghanistan in 2006 with Gen. Jones, the NATO commander at the time.

As the demands on photojournalists change as more technology finds its relevance in journalism, we asked Swain if she thinks the skills of a traditional photojournalist are still as valuable.

“I would say they’re even more important. There’s a role for everybody. It depends what you’re doing. By adding visuals, adding that element into places where it wasn’t before. You might have been OK with just having a newspaper being dropped on their doorstep that didn’t have sound to go along with the stories. Now people want that. They want to be able to hear it and feel it and smell it. Now people want that. I think that when you have really powerful story telling you can kind of give all of those emotions, add that into and really take your stories to the next level,” Swain says.

Beyond video, Swain says she is constantly emphasizing for students the importance of sound.

“One of my favorite ways of storytelling is natural sound packages. By having that sound, it really, it makes you feel like you’re there and it just takes advantage of all your senses.”

This is the piece Swain shared with It’s All Journalism from a Memorial Day assignment at CNN. Follow Bethany Swain at @BethanysStories on Twitter.

Read a transcript of our interview with Bethany Swain.