On their podcast Ear Hustle, Nigel Poor, Earlonne Woods and Antwan Williams want to tell stories from “the inside” — literally inside San Quentin Prison in California. 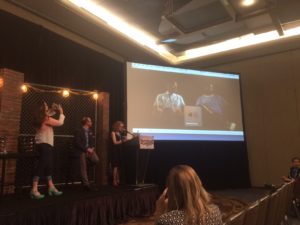 Nigel Poor, left, shoots a video during her Podquest finalists’ presentation at Podcast Movement 2016 in Chicago. On the screen are Earlonne Woods and Antwan Williams, Poor’s partners in producing the Ear Hustle podcast.

Ear Hustle is one of the four finalists in Radiotopia’s Podquest competition, which seeks to find new voices in podcasting. Radiotopia will be announcing the winners of Podquest in October.

Poor and the other finalists took part in a July 7, 2016, panel at the Podcast Movement conference in Chicago. For obvious reasons, Williams and Woods couldn’t join the other contestants, but they did record a video that was played during the presentation.

I had a chance to sit down with Poor after the panel. She shared some of the human stories Ear Hustle hopes to tackle as well as the unique production challenges the podcast faces by recording in a prison.

#PM16 – Should I have a website for my podcast?