This is a special post-election podcast.

I had the chance to spend election night at NPR headquarters in DC with 30 journalists, community activists and political geeks. The event was hosted by NPR’s social media desk and senior strategist Andy Carvin (@acarvin). 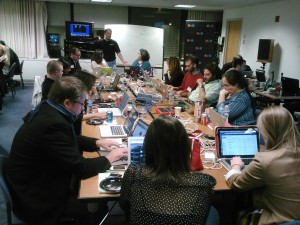 Inside NPR headquarters in Washington on election night. NPR senior strategist Andy Carvin stands in the back of the room. (Photo by Jolie Lee)

It’s quite a change from the last presidential election social media event at NPR, which Jill Miller Zimon (@JillMZ) attended four years ago.

“These days, what’s different in 2012 versus 2008, we have a lot more sources of information we can consult at anytime,” said Zimon, who wears several hats, including a council member in Pepper Pike, Ohio, a blogger at Writes Like She Talks and a director of Civic Commons, a Knight Foundation grantee to enhance civic engagement.

And it’s not just journalists who have taken up the social media site. The room included activists, such as Juan Escalante (@JuanSaaa), a recent graduate of Florida State University, an immigration rights activist and an undocumented immigrant.

He said social media has allowed immigrants to give voice to their cause while maintaining anonymity. But in recent years, Escalante said activist groups he works with tried to “wean” people off of anonymity “so we can create an actual network” where people collaborate on legislation like the DREAM Act. 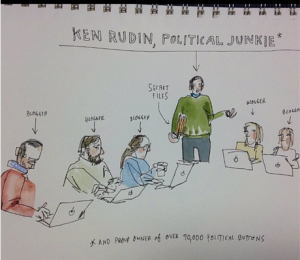 Twitter dominated in sharing information, but some also live-blogged the election — like Ben Cohen, editor of The Daily Banter (@TheDailyBanter), a left-leaning online publication. Cohen admits, “I suck at Twitter.” But he still has embraced the need to use it. His blog posts were automatically tweeted out as he published them.

In the room too were visual journalists, including illustrator Wendy MacNaughton (@WendyMac) who sketched and painted scenes in her notepad, took photos of her art on her iPad and then posted the images online.

She got rave reviews from the other participants, and I asked her if she usually got this kind of response from people.

“From people who spend a lot of time online, yes,” she said. “So many people are spending so much time making and doing things in a digital space, when somebody pulls out a pen and paintbrush, it’s almost shocking.” 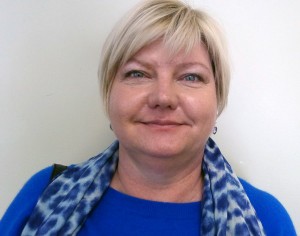 Producer Michael O’Connell interviewed Danish journalist Pia Roen on Election Day, Nov. 7, 2012. She was in Washington, D.C., recently, observing the 2012 Presidential Election and reporting back to her morning radio show on the Danish Broadcasting Corporation. She compared and contrasted broadcast journalism in the U.S. and Denmark, including how the Internet has changed the industry in her own country.