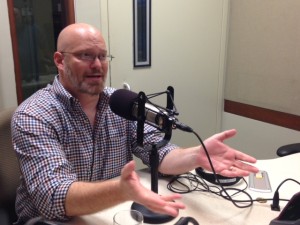 Over his career, Weldon has worn many hats. He’s been a theater critic, a science writer and a bookstore clerk. His fiction and criticism has appeared in The New York Times, The Washington Post, The Atlantic and many other publications.

As a contributor to NPR’s pop culture blog, Monkey See, Weldon writes about comic books and graphic novels. He is also the author of “Superman: The Unauthorized Biography,” which is a cultural history of the comic book hero.

Weldon joined us in studio to talk about his writer’s journey, the challenges of covering pop culture and his upcoming book, “The Caped Crusader: The Rise of Batman.”

You should meet NPR’s Stephen Thompson

#106 – How to market to and break-down content for mobile