Rob Pegoraro is one of a dwindling number of journalists who have been able to make a living freelancing.

Pegoraro, who specializes in reporting on the technology, appears weekly on USA Today’s website. A few days ago, he also announced that he would be writing a column for a tech news site run by Yahoo. 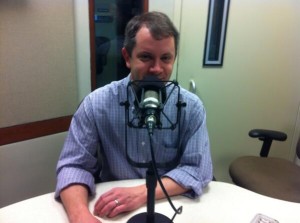 Rob Pegoraro is a freelance technology reporter based in Washington, D.C. (Photo by Michael O’Connell)

Of course, Pegoraro’s 17-year career at The Washington Post helped his freelancing prospects when he left the paper a few years ago.

“My first and least useful bit of advice to somebody in this is if you can first spend 17 years at a major American paper and, you know, 11 years as their flagship technology columnist, it’s much easier to look for work. Work will look for you in that case,” said Pegoraro in our interview with him.   First and foremost, it is important, as a freelance journalist, to know that you have some regular work every month. Almost immediately after leaving The Post, Pegoraro set up three contracts that provided a relatively nice “floor” to his income.

In terms of compensation, Pegoraro said that most of the work he does comes at a “set rate” per story. He has some arrangements where he gets paid by the word, but not many.

“Travel expenses pretty rarely – they’re not covered all that often,” he said.

Pegoraro also said having personal control over your brand and name is essential, not just for freelancers, but for all journalists. He recommends everyone set up a personal website.   “You want to make sure the first Google result for your name is a site you control, preferably not something like a Facebook page,” he said.   The freelancer also recommends engaging readers. Journalists should monitor and participate in the comments section of their posts or articles when possible.

“I think readers will give you credit for showing up,” said Pegoraro.

Investments in small things, like creative business cards, can also make a difference. Pegoraro said people compliment him on his cards – which are slightly smaller than most – all the time.   Finally, Pegoraro suggests that freelance writers form a limited liability company, which adds a little protection damaging lawsuits and an air of seriousness to his business.  “I think it is a little bit more professional if you can say, make the check out to my LLC,” said Pegoraro.