Scott Brodbeck isn’t afraid of a challenge. In fact, he was attracted to an oft talked about challenge facing the journalism industry: how to make local news work online on a stand-alone basis.

Starting out with a laptop, camera and police scanner, Brodbeck is the editor and founder of ARLnow.com, a hyperlocal site “providing original, enterprising, and up-to-the-minute local coverage of Arlington, Va.”
A local himself, Brodbeck is a Pentagon City resident. 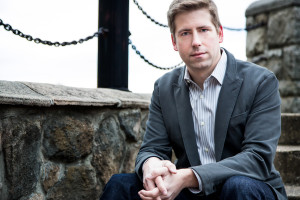 “We had the virtue of starting out small—just me in my apartment,” Scott said. “It’s harder to be The Washington Post and try to adjust your cost model down to what makes sense for the Web. Organizations trying to scale down are having a hard go of it.”

Since launching in January 2010, ARLnow.com’s readership has scaled organically and today advertisers are seeking Brodbeck out. Sales have doubled every year for the past three years.

“It doesn’t exactly come naturally to someone with a journalism background,” Brodbeck said of the developing the business model. We’ve been learning as we go.”

With a sales operation now in place, led by a recently hired a sales director, the independent online news organization is on track to grow even more — both in audience and in revenue — in 2014.

Local doesn’t equal easy. Brodbeck has been working in local news since 2005, working on the broadcast side as a news writer/producer at two local TV stations. In 2009, he left his job to pursue a new interest. He wanted to do something more Web-based and related to the future of news.

“I think local news is a very important thing to both democracy and people in communities,” Brodbeck said. “It is the record of what’s happening down the street, what’s happening with county government, it’s information that’s very relevant to people.”

National news on the other hand doesn’t have the same impact. Brodbeck sees hyperlocal news as the first line in journalism.

Despite the large population living in Arlington — roughly 220,000 people — it is located in the smallest self-governing county in the United States. The high density and presence of a wide variety of businesses keeps Brodbeck, and now a second reporter, quite busy.

“We would love to get to everything, but even if we staff up to a dozen people, we still wouldn’t be able to get to every high school soccer match or planning commission meeting,” he said. “You do have to prioritize.”

A five-day, three-part investigative series just won’t fit on the editorial calendar. While the prose might not be the most extensive, the mission of finding scoops and getting out facts has been met daily for the last four years.

With the success of ARLnow.com, Brodbeck has expanded to two other markets, Bethesda, Md., (bethesdanow.com) and Reston, Va., (restonnow.com).

It’s All Journalism launches partnership with Association of Alternative Newsmedia