On Sept. 1, 2010, a lone gunman walked into the Discovery Channel building in Silver Spring, Md. That was the day Mandy Jenkins first realized the true power of social media.

Jenkins, an Ohio native, was the social media editor at TBD.com, a local news website launched just a month before by Allbritton Communications and WJLA-TV in Washington, D.C. 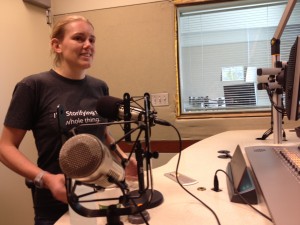 Mandy Jenkins spoke to It’s All Journalism producers Megan Cloherty and Michael O’Connell on Saturday, Jan. 19, 2013, in Washington, D.C. She talked about social media and crowdsourcing. (Photo by Megan Cloherty)

“I think it was the spouse of someone that worked here at the TV station had called us and said there was a hostage situation happening,” Jenkins told It’s All Journalism podcast producers Megan Cloherty and Michael O’Connell. “We were able to kind of get
our heads together really before it was reported that it happened.”

While the newsroom mobilized reporters and the TV station sent out its helicopter, Jenkins began opening up Twitter searches on her desktop.

As the hostage situation unfolded, the police SWAT team locked down the area, making it impossible for any reporters to get near the Discovery Building.

But, Jenkins was already making connections with sources in the vicinity.

“Think about if you’re locked in a building because of a gunman,” she said. “You are not getting any work done. Nobody is working when that happens, so everyone is on Twitter. They’re taking photos out their office windows. They’re tweeting them. I was getting in touch with these people via Twitter to say, ‘Hey, tell me what you’re seeing. Can we use your photos?’ And when they gave us permission, we used their photos on our site. We used them on television.”

Jenkins continued to talk to her sources and gather information for others in the newsroom to follow up on. “They were giving us tips of what they were seeing, what they were hearing,” she said. “And it was something that nobody else really had because nobody could get into this perimeter.”

Ten hours passed from the moment the story broke to when Jenkins was finally able to stand up from her desk.

“I couldn’t conceive of being able to actually pull off this kind of crowdsourcing and source finding and social media before,” Jenkins said. “It was honestly kind of a watershed moment for me too. It kind of took me to a whole other level of appreciating social media after that day.”

Jenkins first became interested in social media in 2007, when she put together a “manifesto” on the subject for her bosses at the the Cincinnati Inquirer. Much to her surprise, they liked the idea and made her the paper’s first social media editor.

When former WashingtonPost.com Editor Jim Brady was putting a staff for TBD.com, he hired Jenkins. After TBD imploded, she went on to do social media for The Huffington Post’s politics section.

“One of the things that I’ve been working on quite a bit is rolling out a product that we built with a vendor called Social Media Wire,” she said. “You can see that on the New Haven Register‘s website. … It’s essentially pulling together local feeds of RSS, local blogs, YouTube channels, different tweets from all around an area to try to give a place to focus in on what’s happening in social media there.”

Crowdsourcing during a crisis

As Jenkins learned from the Discovery Channel story, crowdsourcing can be incredibly useful in gathering information during a breaking news story. When an incident occurs, the first thing she recommends is opening up keyword searches on Twitter.

“That means lots of different windows, trying lots of different things,” Jenkins said. “For this hostage thing, for instance, I put in ‘hostage, gunman, Discovery.’ I tried to put in the address to see if someone was just saying, you know, what they were seeing going past there. Looking for any kind of keyword combination that was going to start pulling people.”

Once news of the incident is reported, those windows will start to fill up with people reacting to the situation, which can create some problems for a reporter trying to gather usable information. 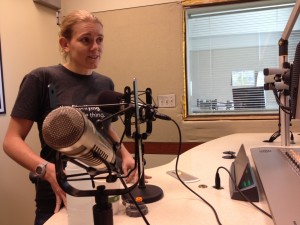 Jenkins recommends trying to start individual conversations in order to verify a source’s story. This may mean direct messaging the source and asking them for their telephone number.

“You can’t keep it on social media,” she said. “For one thing, you’re not going to get enough information for what you need, but it’s also the best way to start verifying who someone is and what their connection to the story is if you’re actually talking to them on the phone. Because, if someone isn’t necessarily representing themselves very well, the first thing that’s going to fall apart is their story, as soon as they’re actually talking to you. It’s easy to pretend that you’re involved with something on Twitter, but it’s not so easy once you’re actually in a conversation with someone on the phone.”

Jenkins also said it’s helpful to make contact with more than one source to crosscheck stories and hand off contacts to others in the newsroom to follow up on.

Social media is useful beyond breaking news stories. It can help in a news outlet’s day-to-day coverage and community engagement.

“It seems like the easiest advice in the world, but just being yourself on social media makes people know that you’re a human that they can talk to about things,” Jenkins said.

That doesn’t mean you have to report your every thought or tweet photos of what you had for lunch. In fact, Jenkins says not to do that.

“There are reporters who definitely overshare,” she said. “I won’t name any names, but there are quite a few of them in Washington political coverage especially that just tweet all day long about whatever is on their minds at this exact moment. And I think that it’s finding that happy medium between being relevant and being interesting and, you know, being fun too. But also, just keeping it from overwhelming people, being maybe a little too into yourself. Because I think it’s finding that middle ground between those two places.”

Read a transcript of our interview with Mandy Jenkins.