WASHINGTON – Sports reporting is one of the first jobs in journalism where multiple mediums were expected out of a reporter’s daily product. Even years ago, when the black and white scores arrived folded on fan’s doorstep, they could likely hear their favorite writer on the radio every now and again. 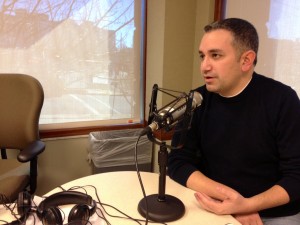 CSN’s Mark Zuckerman says not only has social media changed the sports scoop, but it has changed the story pitch as well. (Photo by Megan Cloherty)

Mark Zuckerman was that reporter. His career started in print, and he became well-known by fans in Washington writing for The Washington Times. His career took an interesting turn in 2010 when the Times collapsed its sports department and Zuckerman found himself asking fans to support his work covering the Washington Nationals spring training.

After an unexpected outpouring of financial support from his readers, Zuckerman launched NatsInsider.com and became one of the few reporters to successfully pull-off a paywall. Now, Zuckerman reports for Comcast Sports Network where he still covers the same team, but in a very different way than he did when his career began.

“Yeah, it’s in a lot of different ways. First and foremost is the immediacy of it. I remember writing for a newspaper and something happens early in the day, ‘Well, I have all day to work on that story. I’ll file it at the end of the day and it will appear the newspaper the next day. Nobody’s going to read it until then.’ Now, [when] something happens, I’d better be posting that somewhere immediately, whether it’s Twitter or ultimately on the blog or on the website, because people want to read this immediately. And, it’s changing. It’s evolving over the course of a day,” Zuckerman said.

Ben Raby, who covers the Washington Capitals, works in radio, television and reports online. When Raby’s career began, he was exposed to a number of different mediums. But, he couldn’t decide which he liked most. 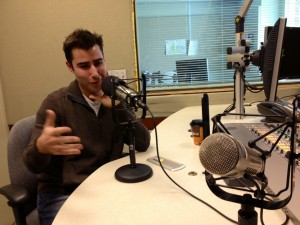 Ben Raby says he could never choose which medium he preferred, so now he does all of them. (Photo by Megan Cloherty)

“I thought 10 years ago, when I was finishing up at school, I thought it was a bad thing that I couldn’t say in one sentence, maybe it is, but I couldn’t say in one sentence, ‘I want to be a play-by-play announcer. I want to do this.’ This is what I said: ‘I like to write. It like the broadcasting side. I like a lot of different things.’ And at the time, I thought, ‘This probably isn’t good. I should probably narrow this down.’ But yeah, as you said, I couldn’t have predicted this 10 years ago. … You have to be able to have that presence on camera, etcetera, so it’s definitely an advantage,” Raby said.

The short shelf life of the scoop

It’s good advice for those aspiring to work in sports: Be versatile. And don’t expect to get a scoop anymore. Not as long as Twitter is around.

“The problem is nowadays a lot of the “scoops” are, ‘Oh, well, they just signed this player or they just traded this player.’ You get the news of it. You put a little line on Twitter and within, let’s say, I had it first. Well, within five seconds, one of my competitors is making a phone call. They’re confirming it and now they’re reporting it or vice versa. It gives me the opportunity to follow up on something. Scoops last literally seconds now where they used to be a day or two,” Zuckerman said.

Not only have the scoops changed, but so have story pitches. Sports reporters now know what fans are talking about thanks to social media. Raby and Zuckerman say social media helps them interact with their readers/listeners/viewers, but it also helps them understand what angle is top of mind for fans.

“I think sometimes you might sense that people are focused on one particular aspect that maybe you didn’t think about,” Zuckerman said. “Maybe I didn’t think that was the most important thing, but a lot of people were asking about it. That helps drive your coverage and allows you to focus on certain things.

“When athletes started to tweet, it was something the athletes did on their own time,” Raby said. “I think Shaquille O’Neal was one of the first that got it out there and got a million plus followers. I think if it started again, teams would be a little bit more to the individuals say, ‘Hey, maybe we shouldn’t do this.’ But, it got to the point where players were slowly doing it one at a time, one at a time, and now it’s sort of teams can’t say, ‘Hey, no tweeting. You can’t do that.”

While teams have to worry about how to manage their player’s social feeds, reporters are expected to stay on top of what athletes are putting on social media, whether they should or shouldn’t have shared it.

Best of times, worst of times for sports journalism

Zuckerman acknowledged that the shift to digital media has changed sports journalism forever. “I think, in a lot of ways, sports journalism has never been better than it has been now,” he said. “And in some ways, it’s never been worse than it is now. … The need to put things out there immediately, to maybe not worry as much about accuracy and depth.”

At the same time, the new technology has challenged sports journalists to become better.

“Readers have the ability to read everybody in the world immediately,” Zuckerman said. “It pushes us to do a better job and distinguish ourselves. So, it may read differently, it may look differently than it did back in the good old days they talk about, but I would say there are more really good quality sports journalists out there maybe now than at any time in history.”

Read a transcript of our interview with Ben Raby & Mark Zuckerman.