Steffen Konrath felt the immense weight of the Twitterverse early on, but instead of becoming bogged down, he evolved his definition of news.

“News is not an article, news is a signal,” he said. “A signal is an invitation for conversation.” 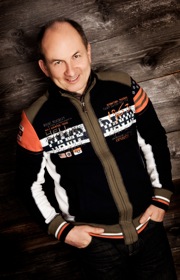 This is the message he will convey and discuss at the upcoming International Journalism Festival in Perugia, Italy, April 30 – May 4.

Konrath is the creator behind Liquid News Room, a curated platform of both social media and hard news. He began the project in order to find a way to make his work easier.

Konrath was covering Japan’s Fukushima nuclear crisis and the London riots and came away from the experience wanting something more to aggregate social media and decipher its legitimacy.

He found that Twitter and other platforms are as much a burden of information as they are a tool — making it hard to strain out opinion from fact.

Konrath says LNR is meant to be a learning model. It’s a learning curve process to find reliable sources such as Twitter personalities, and then flagging them for later use as a credible source.

He says journalists are often working behind a wall, and are too hesitant to engage with the public and express their opinion, which detracts from the fluidity of information. That hesitancy disallows news dissemination and fact-finding through social media from being a two-way street.

Konrath says we all need to better understand the liquidity of the news, and he hopes that the public can wade through the mess that can often populate news platforms.

But in its current state of being, he worries that there’s too many problems facing the news market, and wonders: “Can we continue to have an informed society?”

Catch Amy Webb if you can, the technology consultant and author is charging forward with or without journalists