When “Sopranos” star James Gandolfini died this past summer, I knew I wanted to hear from one television critic immediately – Emily Nussbaum. 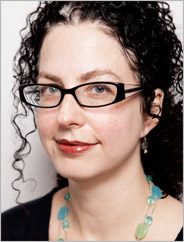 In her opening paragraph, she told the readers out that Gandolfini was the first television star to be taken seriously as an actor, not just a performer – a point that made her “This guy changed the television” argument so much clearer than those of other critics. She explained Gandolfini’s strange sex appeal as Tony Soprano, something that most other writers either didn’t notice or found too off-putting to address in their own recollections.

Selfishly, I probably like Nussbaum because she often feels about television the same way I do. She’s just much more articulate when she gets those feelings down on paper. I often find myself uttering something to the extent of “Yes! Exactly!” when I read her analyses. That’s why I was thrilled when she agreed to be interviewed for the podcast. If she was anything like the person she appeared to be on Twitter, then the interview would be delightful, I thought. Thankfully, I wasn’t disappointed.

Frequently, Nussbaum writes about topics to which I have already devoted a lot of thought, such as why Katherine McPhee was the biggest problem with the now defunct NBC musical “Smash.”

But just as often, she examines things in depth that I have only noticed in passing, like the emphasis on technology in “The Good Wife.” Like any good critic, Nussbaum also forces me to think about certain television show in ways that I hadn’t considered. My favorite piece of her work recently, an essay about “Sex and the City,” gave me a newfound respect for a show that I had always enjoyed, but wrote off as mostly fluff years ago.

That brings me to Nussbaum’s greatest strength. Much as Roger Ebert taught me to enjoy all movies, whether they were classified as serious cinema or not, so too has Nussbaum opened my eyes to new types of television. Sure, she writes about “Breaking Bad,” but she also devotes entire columns to shows like “Switched at Birth,” a teenage girl drama on the ABC Family channel. This show doesn’t sound like it’s for you? I didn’t think so either, until Nussbaum wrote about it and I watched a couple of episodes. Now, “Switched at Birth” has become “Must SeeTV” for me. Go figure.

No one would begrudge Nussbaum if she focused solely on critically-acclaimed shows, the so-called serious cable television stock like “Louie” and “Mad Men” that TV nerds rightfully fuss over. Nussbaum does, after all, write for one of the most well-respected magazines in the country. That she uses her reach and sizable platform to focus on programming from overlooked networks and underappreciated genres — such as anything that can be place family or teenage drama category — is admirable. For television viewers like me, who are willing to pretty much give anything a try, it’s also a public service.