Put aside the still-ongoing pandemic and the story of our lifetime is climate change.

For James Fahn, executive director of the Earth Journalism Network, providing journalists around the world with the right tools to help explain and explore the topics associated with the warming planet is the culmination of a career focused on discussing environmental problems.

“Our mission, from the start, was essentially to improve the quantity and quality of environmental coverage and climate coverage by enabling and empowering journalists to have better reporting,” he says. 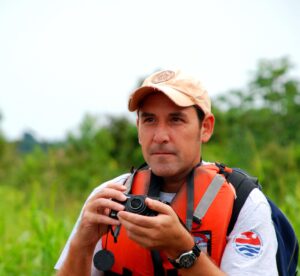 James Fahn is the executive director of the Earth Journalism Network.

“What I saw in Thailand, what we were able to do, we could do a lot of peer-to-peer learning, seminars and workshops and field trips to learn more about the issues we’re covering and how to cover those issues,” he says “We also found strength in numbers. Sometimes, as an individual, it’s hard to get information. When I would ask the Minister of Industry why he would allow companies to dump chemicals into the Gulf of Thailand, he would ignore me. When we had a group of journalists representing most of the country’s media, he answered.”

Fahn and his team are now in Glasgow for the Climate Change Conference, partnering with The Scotsman to not only cover the meetings but to help train journalists and share resources.

“These conferences are really important global negotiations about how we as a planet and human civilization will try and tackle this huge problem,” Fahn says. He covered his first climate conference in 1996 and EJN has been attending and covering them since 2007.

“These are wonderful opportunities for journalists, not just to cover these important negotiations that affect all of us. It’s a huge immersion course to learn anything and everything about climate change. … We realize this is a great opportunity to link up with local media in Scotland,” he says. The Scotsman is the largest newspaper in Scotland. We set up a partnership where our fellows will write stories for the paper, so that its audience can learn how climate change is affecting other parts of the world, how the issue is viewed elsewhere, and hopefully they’ll produce some stories, the Scotsman will run some stories from journalists covering the conference as well.”

James Fahn, executive director of the Earth Journalism Network,  talks with It’s All Journalism producer Michael O’Connell about his experiences as an environmental reporter, the importance of thinking outside the box when writing about climate change and the ongoing Climate Change Conference in Glasgow, Scotland.