With all the discussion about how dire things seem in the mainstream press, it’s nice to hear about one corner of journalism that is flourishing in the new digital environment — namely the alternative weeklies and websites covering local news, music and entertainment. 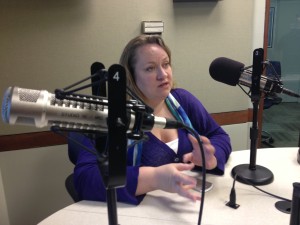 Tiffany Shackelford of the Association for Alternative Newsmedia talks about the positive things going on in the alternative press.

“We actually in some ways have skipped over some of the mess that the mainstream media made of themselves in the digital space, which has been so awesome,” said Tiffany Shackelford, executive director of the Association for Alternative Newsmedia. “And, we’re going mobile first, digital first, thinking about smart partnerships with startups. So we are there now but maybe came, as my father said, “went around our ass to get to our elbow.”

She talked candidly to It’s All Journalism producers Megan Cloherty and Michael O’Connell about some of the challenges alternative newsmedia is facing but also about its many successes.

“What I’ve been saying a lot is ‘smart’ is the new alternative. We’re writing long form, but it’s still popular,” Shackelford said. “Kids love it, believe it or not. And we’re writing really smart pieces that speak truth to power.”

Finding an audience, the audience finds you

Growing out of the radical movement of the 1960s, the alternative press is just that — an alternative voice for those not being served by mainstream media.

“I’m a Gen-Xer and so I grew up reading the local alts,” Shackelford said. “I was kind of an artsy kid and was like, ‘I found my people, thank God.’ It was sort of that moment. I think we clearly know who the Gen-X reader is. It’s someone who’s interested in local but also arts and culture. Wants to be hip, even though they’re probably raising kids and are most definitely are not [kids] anymore, but they remember what it was like.”

This “one of us” attitude gives a perspective to this type of journalism, but it doesn’t limit either. Local alternative weeklies are succeeding where larger, more traditional newspapers are struggling.

Shackelford points to AAN member Boise Weekly as an example of an alternative using a digital approach to take on the establishment.

Another success story is the Charleston (S.C.) City Paper, for the way it promotes content around the local Spoleto festival and experiments with new digital advertising models.

“They are rocking it,” Shackelford said. “For instance, if you get their mobile app, and you access their paper from 11 p.m. to 2 a.m. on a weekend night, you get an ad for a strip club. Because … there’s a good chance that might be something that you might want. But the rest of the time it’s for restaurants.”

Digital has opened doors for the alternative press and perhaps it can do the same for traditional media as well. But waiting for the mainstream to catch on isn’t Shackelford’s concern.

“I have a piece of art on my wall in my office that says, ‘Change takes time. Be patient.’ And I have to often remember that,” she said. “That it is onboarding people onto new technology, getting training, getting people ready to go, but also teaching them how, if something’s not working, what can we do to get you out of that really fast.”

Read a transcript of our interview with Tiffany Shackelford.