Anybody who was surprised about the upheaval in newspaper publishing just wasn’t paying attention.

As entrepreneurial journalists create new ventures to bring their work to wider audiences — both online and in print — their pen and brush colleagues are doing the same. 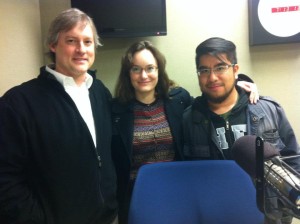 Take Magic Bullet Comics, for example, a self-published newspaper highlighting the work of artists and writers living in the Washington, D.C., area.

“Initially, the project was to just kind of showcase our work,” said cartoonist Matt Dembicki. “You know, we liked the paper format.” 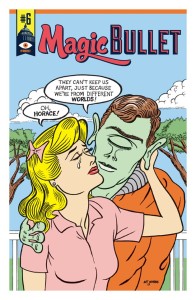 Magic Bullet #6 was published in February 2013.

In 2005, he and a group of artists formed the DC Conspiracy, to find new outlets for their comics. Soon after, they launched Magic Bullet, a tabloid-sized newspaper filled with original artwork and writing.

“We just felt like maybe that was our in since newspapers were kind of going out of print, out of style,” Dembicki said. “This kind of left us with an opportunity to showcase our comics in a bigger format too. It appealed to a lot of folks in the group that instead of having mini-comics where you draw fairly large and you have to reduce it, here you can kind of play with a larger format and try different things.”

Magic Bullet’s sixth issue hit the streets in February with a four-color cover and centerfold.

This was no vanity project, either. The creators sold advertising to pay for the 5,000 copy print run and distributed copies to retail outlets around the region. Copies are available online from the DC Conspiracy store.

“We do have a large support from the community and from other artists, and it’s interesting to see that grow and like have people throw money at us to say, ‘Hey, I want to have my ad in here and also I want to see this paper printed,’” said Carolyn Belefski, who edited issue six.

Each artist or group of artists contributed a page-long strip. Belefski and her husband Joe Carabeo contributed their original strip “Black Magic.”

“It’s just a commentary on life,” said Carabeo. “But it is about technology, just how far is it going to take and how much are we going to lose touch with the whole, entire world.”

For his inspiration, Dembicki turned to the school shootings in Newtown, Conn.

“I guess when we started working on this particular issue, that was a hot thing in December, and I think it affected a lot of people,” he said. “So, I kind of wanted to do something, but I didn’t want to do something that was too heavy handed. So, the style I used was kind of playful.”

In the grand tradition of editorial cartooning, Dembicki juxtaposed two contrasting elements, text from a National Rifle Association press conference and Lego toy figures. The result is an ironic take on the national gun debate. 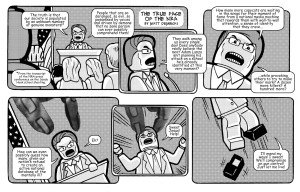 “I kind of thought that I delivered a good message and … let it kind of speak for itself,” he said.

While most people stuck in the shifting tide of publishing are saying “Go digital,” the Magic Bullet team’s decision to print their work in newsprint seems oddly retro.

They’re not completely averse to the digital realm. The team uses social media and a website to promote Magic Bullet. Belefski draws the online comic strip Curls. She and Carabeo also record the weekly podcast The Carolyn and Joe Show.

But having an ad-supported, print product for people to discover delivers a different experience for readers stuck in the digital mindset.

In our podcast, Carolyn Belefski, Joe Carabeo and Matt Dembicki talk to It’s All Journalism Producer Michael O’Connell about self-publishing, podcasting, paper vs. digital and the future of comics and comic books. Dembicki also talks about District Comics, An Unconventional History of DC, a collection of visual stories telling unusual, true stories about Washington, D.C.

Read a transcript of our interview with Matt Dembicki, Carolyn Belefski and Joe Carabeo.