Tom Jackman, the founder and driving force behind The Washington Post blog, The State of NoVa, admits that community journalism is not rocket science.

“It is simply going out with a pen and paper and asking people what’s happening? Why? How? Who? What? Where?,” he said. “It’s really easy and it does involve, you know, getting out from behind your desk and going out and seeing people and finding out information.” 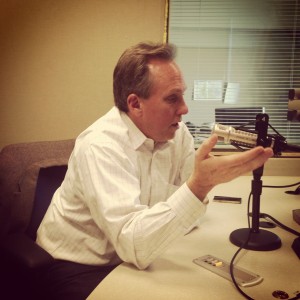 Tom Jackman, founder and reporter of The Washington Post blog The State of NoVa, talks to It’s All Journalism Producer Michael O’Connell and Online News Association Digital Manager Jeanne Brooks about the challenges of being a community journalist. (Photo by Jeanne Brooks/ONA)

But, he will also admit that just because being a community journalist is not complicated doesn’t mean that it’s not a rewarding or important job.

“Call me crazy, but I think people should and need to know about the news where they live,” he said.

Jackman launched The State of NoVA in 2011 to cover the news in the Virginia suburbs immediately outside of Washington, D.C. — the City of Alexandria and Arlington, Fairfax, Loudoun and Prince William counties.

“I’ve been based in Fairfax County for 14 years for the Post, covering cops and courts and various other stuff, big stories, little stories,” he said. “And I grew up in Fairfax County and I know a lot of people who are actually from there. I think the target audience really is the people that are from Northern Virginia.”

Recent stories by Jackman have focused on drinking water in Fairfax and a new baseball stadium in Loudoun. These types of stories may only affect people in those particular communities, but they have a huge impact on those readers.

Read a transcript of our interview with Tom Jackman.

Some of Jackman’s other stories have a broader appeal online, even though they began as local stories, such as an interview with Northern Virginia native Dave Grohl, the drummer from Nirvana and the frontman for The Foo Fighters.

In 2011, Jackman wrote about Evan Moss, a 7-year-old boy with epilepsy who was selling books he had written to raise money to purchase a service dog. When Jackman’s story went viral, people turned out in droves to buy the books and Evan raised $60,000 to buy a dog for himself and other people in need.

“Because I have access to this website and this audience, I can have that kind of impact with stories, which is the same with the printed edition,” he said “But, in general, local stories don’t do nearly as well on the Web as world and national stories.”

Local news in an online environment

This local focus, which is the blog’s strength, is also something that concerns Jackman when he talks about the economic realities of online journalism.

The Washington Post still prints 500,000 daily and 700,000 Sunday editions of its newspaper, but those numbers are dwindling.

“The amount newspapers can charge for print advertising is way more than Web advertising,” Jackman said. “And so, the question is, even as the Web advertising rises, the rate for that is much smaller and so the money made is far less. And for The Washington Post, their online presence is worldwide, so vast amounts of readers come from overseas and from elsewhere in the country.”

Those international and national readers may not be as interested about the water situation in Fairfax County or a police shooting in Alexandria as they are about what’s happening on Capitol Hill.

“Stories about national politics and world politics get huge readership,” Jackman said. “When I do a story and I get a lot of readers, if I get 200 or 300 comments on a story, that’s massive for me.”

Jackman’s concern is shared by many in the industry, who are watching large newspapers fold or cut their staffs in order to survive. Smaller staffs mean fewer resources available to cover things like local news.

“I want community journalism to continue,” he said. “I do think it’s important. I do think it has impact, but the numbers are not comparable in readership, at least at our paper because we also have access to, you know, more people coming in at 2:30 in the morning from France who are reading about Obama.”

Read a transcript of our interview with Tom Jackman.