In 1972, Tony Wheeler and his wife Maureen were living in London, where they had just finished their studies. They decided to take a year off to travel around the world, with the intention of “getting travel out of our systems,” Wheeler said. 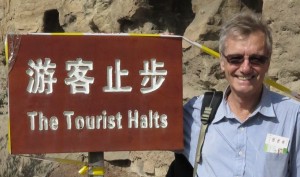 Tony Wheeler at the Yungang Caves.

The couple left London in an old, beat-up car, which took them all the way to Afghanistan. Eventually, they made their way overland across Asia and ended up in Sydney, Australia, six months after they’d started.

They had 27 cents between them.

The journey that was intended to cure them of the travel bug did just the opposite. In late 1973, they launched Lonely Planet Productions, with Tony’s first book, “Across Asia on the Cheap.”

Lonely Planet went on to become the largest independent publisher of travel guidebooks in the world and the Wheelers found themselves professional travelers.

“I always loved travel,” Wheeler said. “I don’t think it was the one trip that convinced me that travel was a very nice activity to be in. But it was that one trip that led me to Lonely Planet.”

At the beginning, Lonely Planet followed in the tradition of other guidebook publishers, typing up articles, cutting, pasting and assembling books for printing. But the arrival of computers — and later digital distribution — altered the industry and helped guidebooks to come into their own.

“Computers really helped to launch travel guides, because travel guides are not like a book that you write it and it’s done forever, you’re constantly updating them and changing them,” Wheeler said. “That really became much easier when computers and word processing and so on came along. So, in a way, digital technology was a very important part of the game at that time.”

Digital technology also changed the way people consumed travel information, which can now be accessed via tablets of cell phones.

Travel writers find themselves competing to get the attention of readers who glean information through crowdsourcing and social media.

“But the traditional travel writer still has a role,” Wheeler said. “He or she is someone who is an expert who goes there, who knows the place, whose advice and experience can be trusted.”

In 2011, the Wheelers sold Lonely Planet. They now focus their efforts on Planet Wheeler, a foundation that funds projects in more than 50 developing countries.

Listen to the It’s All Journalism podcast, where Tony Wheeler talks about the challenges facing new travel writers; his latest book, Dark Lands; and his upcoming appearance at the International Journalism Festival in Perugia, Italy.