His new book, Sh*tshow: The country’s collapsing and the ratings are great, spends time on the campaign trail during the 2016 presidential election, taking him from Roger Ailes’ office to a Trump rally in which he makes the eventual president suggesting himself as a running mate. 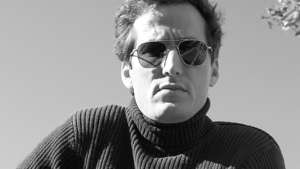 “We wanted to take a camera and look at real people, not issues,” he says of the book. “We wanted to do something entertaining, amusing, emotional and true. We went to the Texas border, where women and children are coming over, and you look over and see shiny new factories (in Mexico). Then you realize those factories came from Flint. Then you go to Flint, where there are no factories hardly anymore and you realize everyone’s mixing the water with Kool-Aid because it tastes so bad, and then you find out the water’s poison because a couple contractors, couple politicians, couple trade unions wanted to make some money. Then you go to Detroit, to Baltimore, to the campaign trail with Trump carpooling with the grand dragon of the Ku Klux Klan, the Bundy ranch, the Oregon takeover – we were everywhere.”

Early on, during a press event, LeDuff stood up and suggested to Trump that he could win the presidency. Why?

He suggests the Obama win and the Trump win aren’t all that different.

“In a way, (Obama) ran the same campaign as Trump did, maybe more refined, but he was running against the same person and his message was it’s a corrupt, elitist establishment that’s not doing much for you. Trump ran against the same person and, in his own bellicose way, did the same thing.” An estimated 9 million voters who supported Obama voted for Trump; 4 million African Americans who had supported Obama “saw nothing good and stayed home. That 13 million people, a good portion of it, is the Rust Belt that delivered” Trump into the White House, he said.

The book isn’t without some lighter, comical moments.

“We’re at the border and the women and children are being smuggled in by jet skis – Jet skis!,” he recalled. “So what do we do? I put on a Speedo with USA tattooed across the ass, I blow up a yellow rubber kayak, put on a straw hat and I’m padding around in the smuggling route … just to see what kind of reaction I’m going to illicit. The whole thing is absurd.”

Author Charlie LeDuff joins producer Michael O’Connell to discuss his new book, Sh*tshow: The country’s collapsing and the ratings are great, and recounts the time he was this close to becoming Trump’s running mate in 2016.

#304 — Fighting for truth through transparency and sunlight