The Washington Post underwent its biggest expansion in over a decade this summer and Andrew Pergam was at the center of it. 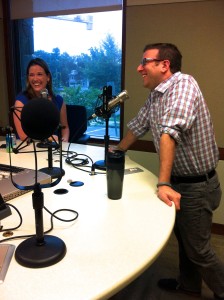 Pergam is a senior editor for the new PostTV, a new, online video venture the venerable newspaper introduced to much fanfare and scrutiny last month. PostTV only features a few shows – “In Play”, “The Fold”, “On Background” and “Post Sports Live” – right now, but there are plans to add more programming moving forward.

“We’re learning how to do longer form shows so that ultimately five years from now, when you’re watching it on your connected TV, you go to PostTV, and you can sit back and watch a whole half hour show. But it’s all chopped up into clips and so you can easily navigate and say ‘Hey I just want to watch this segment on Boehner,” Pergam said.

“That’s the idea – recording full shows, chopping it up into bits,” he added, “We think people should be able to choose what they want to watch.”

The Post hired a team of reporters and producers to work specifically on PostTV and all of the new digital shows are built entirely in house, but Pergam’s team also works closely with other factions of the staff, particularly the politics department. They are also encouraging individual reporters to shoot video out in the field that can be sent back to the newsroom, he said.

While cable and broadcast news are trying to appeal to a very broad audience, PostTV hopes to reach people who are looking for more nuances in their political coverage, who may come in with a more sophisticated understanding of the political landscape.

“This is for fans of politics. There are some people who a 90-second story on the nightly news isn’t enough. They actually want a little bit more,” he said.

There certainly is a lot riding on the success of PostTV, an expensive undertaking for a newspaper that has been on financially shaky ground.

“This is the largest investment that the Post has made in something in more than a decade since they started the website,” Pergam said. “Everybody’s watching it and everybody wants to know how it’s doing.”

Though it’s still early, so far so good for PostTV, according to Pergam.

In addition to his job at The Post, Pergam runs Spark Camp, an annual gathering of journalists, tech folks and others who are interested in media problems.

“Most recently we did one on storytelling, which is a real broad theme. Within that we found that there were a couple of Hollywood people there, there were some Broadway folks. So, people from all sorts of different walks of life,” Pergam said.

Unlike many media conferences, Spark Camp is an invitation-only event. Pergam said the nonprofit’s staff spends a great deal of time figuring out who should attend.

“We’re looking for people who have done really interesting things in their careers. We’re not bringing them there for the positions that they’re in, their job title. We’re bringing them in for what they’ve done, for who they are, what they can add to a conversation,” he said.

Spark Camp hopes to solve media industry problems, but also to connect interesting people to one another, and to foster collaboration within the media industry.

“if we can get someone from ProPublica connected with someone from The Wall Street Journal and they do some sort of cool new project out of it, even better,” Pergam said.

As an innovator, Pergam sees a bright future for television online. The Washington Post worked with Google to develop Chromecast, a $35 device that  allows people to watch online video more easily on their television.

Read a full transcript of our interview with Andy Pergam.