WASHINGTON – After five years at The Washington Post, graphics director Kat Downs says there is still a growing need for graphics reporters who are not only telling the story but who are visualizing it for the reader. Downs oversees the Post’s infographics, maps, diagrams and the design that goes into each graphics-supported story. 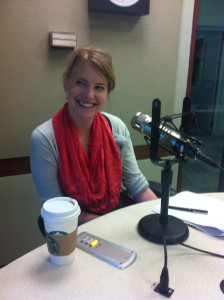 “It’s different than traditional reporting, because you’re really thinking about visual display, explanatory, a lot more data analysis, stuff like that. So, those people are really instrumental in finding the details that you don’t sometimes need in a written story but you need in order to put things on a map or into a diagram,” Downs says.

The graphics coming out of the Post’s coverage of the Boston Marathon bombings showed not only a timeline of events, but among other things, a map of the significant locations that became part of the investigation.

“We started building a street model that we ended up using a lot over the coming days,” she said. “And we started adding more information. I guess that was the day we had details come out about the pressure cooker bomb lid that was found. … So we started thinking about how we could explain the devices that were used, where they were, how they were put out, stuff like that.”

And while they have to sell it in text, sharing Post Graphic’s work on social media gets a response. Downs says they tweet every project they do, especially in breaking news situations — even of a graphic that might very well change.

“We also have a Facebook account where we post everything, a page. And then we have a Tumblr, where we do behind the scenes, which is a little bit more our process of how we get things done and less, ‘Here it is,'” Downs said.

The graphics department, working independently of the paper’s main social media stream, is purposefully using Tumblr to pull back the curtain on its day-to-day design thinking.

“That behind the scenes stuff is pretty targeted. I mean, the people who are interested in that stuff are like really interested into it are geeky people who love what we are doing. And so, the hope is to connect really with that community through that device in a more targeted way than we do with our Facebook and our Twitter, which is more of a blast,” she said.

And charts, especially, seem to do well on social media. Downs says just put the word “charts” in your tweet and it’ll skyrocket.

“That’s one of the really exciting things about working in information graphics right now is that it’s a thing. It’s really popular … And so, when you put things out there, people are excited about them and they’re interested in seeing them,” she said.

While a lot of their work is likely read on smart phones, Downs says the Post is not as far as it would like to be in designing for mobile. But, she says, her team experimented with it during the Boston bombings news week.

“So generally what we’re doing now is we’re thing about, ‘Okay, what is the most important information that people need from this piece and how can we create something really robust for people who have time to consume it?’ And then, something kind of slimmed back for phones … So, I think our goal over the coming year is to make it so that it really is a single-step process to create something that works on both,” Downs says.

News websites, including the Post, are playing with non-linear story telling as far as the placement of photos and infographics in a story. The benefit of the model is that every user can choose their own experience with the story, but it can also be challenging to keep a narrative.

“We’re trying not to produce completely exploratory pieces, because they don’t do our job, which is to tell stories. And we did that for a long time. … We’re like, ‘Let’s just smack it up and put some buttons on it and that’s what people want.’ Our experience has not shown that. The more context you put around pieces, the more you show people what they should be looking for, where the interesting places are,” Downs said.

Find Downs’ very easy to navigate and model for us all portfolio at www.kat-downs.com and @katdowns on Twitter.

Editor’s Note: This text has been edited to reflect a change in context. When quoted as saying the Post is “not there,” Downs’ comment was in reference to mobile-first design, not the paper’s mobile presentation. Her quote following that paragraph is swapped for another from our interview to enforce that point.