Tim Wong works in design and digital layout for The Washington Post. Prior to coming to The Post, he had only worked as a designer for print publications. 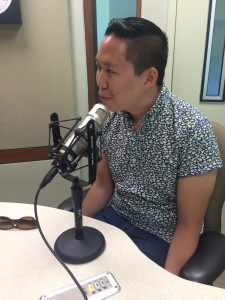 Tim Wong is the senior designer for mobile at The Washington Post. (Photo by Michael O’Connell)

Surprisingly, he hasn’t found the transition to online design work that daunting. Many of the same tenants that apply to print design are also relevant for online presentation, he said.

When first thinking about design, Wong looks to mobile first and then considers tablet and desktop experiences. But designers need to be careful not to make the desktop and tablet experience too simple for users if they start with mobile. The experience on the bigger screen is very different than a mobile device.

“[Desktop and tablets] inherently have more real estate. They often have more processing power. So you really have to scale up,” said Wong.

There is a question about how much energy should be spent doing “one-off” designs, the types of web presentations which can’t be used for multiple pieces of content. Should designers spend more of their time on templates that can be used over and over for new content?

Wong said there should be a balance. News organizations should ideally be doing both. There is a place for unique design that fits on story or piece of media content. But there also need to be basic templates for every day media that goes up on the site.

In the online design world, Wong said there is a debate about whether to use grids or lists as a layout. Wong believes “lists” are winning that fight. “I think [grids] make choice and decisions difficult,” said Wong.

“Gridded off designs, I think they throw too much at the user,” he said. “Users want to be able to make quick decisions.”

Wong said he tries to pay attention to the way all sorts of online design, including non-news apps like Tinder. He is also a fan of the design of Vox.com, a news site started by several former Washington Post employees.