Some of the most interesting conversations — and podcasts — begin with an exchange of ideas on Facebook. 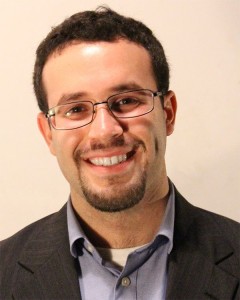 Aram Zucker-Scharff, a content strategist at CFO Magazine, was writing recently on Facebook about why some news outlets were still separating print and digital roles in the newsroom.

“Technically, if we’re all supposed to be going digital first, if we’re supposed to be doing everything electronically now, if the Web is integrated into our workflow at every level, why separate out digital editors as their own role?”

Zucker-Scharff argued that this separation may be needed now, during the transition to a digital first outlook, but one day that role of the editor or manager leading the push to digital may disappear.

“While most of our rooms are trying to become digital first, we don’t necessarily have it all the way there yet,” he said.

In his role as a new media consultant and digital journalist, Zucker-Scharff advises many companies that are finding it difficult to transition to a digital first focus. They struggle to get their news online or to come up with a strategy of when they should be posting content to the Web.

Zucker-Scharff and I exchanged comments on Facebook about this topic, basically arguing many of the same points from two different angles. That’s when I decided it made more sense to bring the conversation to the podcast.

Amber Healy, a friend and new editor at the Sandusky Register, joined our podcast conversation about how newsrooms are succeeding and failing in their move to digital.

And yes, we continue the conversation about that pesky New York Times Innovation Report, which we started with Steve Buttry and continued with Washington Post Designer Tim Wong.