America is changing. The U.S. is facing two major shifts over the next 50 years.

“We are on route to becoming a majority non-white country,” Paul Taylor said. “At the same time, a record share of our population, like me, is going gray.” 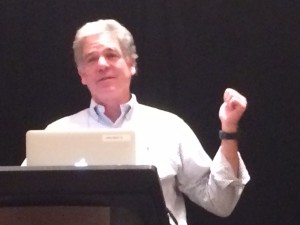 Paul Taylor is a senior fellow at the Pew Research Center. (Photo by Michael O’Connell)

Taylor is a senior fellow at the Pew Research Center, a non-partisan think tank that uses demographic research, media content analysis and public opinion polling to examine a variety of topics affecting America. He is also the author of the recent book, The Next America, which looks in greater detail at the looming generational showdown.

“Demographic change is a drama in slow motion,” Taylor said, during a presentation at the 2014 Association of Alternative Newsmedia conference in Nashville. “It unfolds, tick by tock, incrementally, but it changes society in fundamental ways.”

Either of the shifts Taylor described would be a significant demographic story, but because they are happening simultaneously, they are having major impacts on everything from politics to entitlement programs to marriage.

“We are going from an 85 percent white nation to a 43 percent white nation, and we are becoming a rainbow,” he said. “Through most of our history we were white with a smattering of black and by the middle of this century, we will be a much more varied tapestry with lots of different nationalities, races and colors.”

Driving the shift in diversity is the modern immigration wave that began in the mid-1960s and continues today. Unlike previous waves of immigration, the majority of new Americans are Hispanic or Asian in descent. Europeans only account for 12 percent of the new immigrants.

“Since the 1960s, we have been a nation of immigrants,” Taylor said. “We celebrate immigration. Immigrants have always replenished our economy, and, in this new wave, they’re actually changing our racial and ethnic complexity.”

With fewer children being born these days and people living longer, the pyramid model no longer fits.

“So, we’ve got ourselves a rectangle,” Taylor said. “This is uncharted waters. This has never happened before in human history in any society.”

This week’s podcast features audio from Paul Taylor’s presentation at the 2014 Association of Alternative Newsmedia Convention: The America of Tomorrow.

Comic satire with the Bob Woodward seal of approval

Going Down to Nashville — AAN Convention 2014