“When we think of arts writing, most of what people are thinking of is criticism,” said Bettmann, the managing editor of an arts magazine, Bourgeon. He is forever concerned about what will become of the arts writing profession, now that every twenty-something can start a blog.

“I worry about the future of arts journalism. I feel like we are losing some of the qualities that have lead to the best achievements in the arts over the course of history,” said Bettmann. 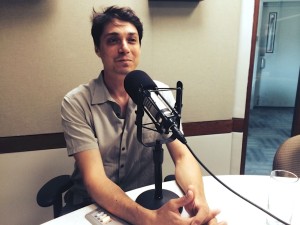 Robert Bettmann is the founding editor of Burgeon, a literary arts magazine. (Photo by Michael O’Connell)

In his career, Bettmann has focused on classical music and classical dance. He has no problem with popular culture, but he doesn’t think people should mistake the latest “Batman” movie as a substitute for classical art. Classical art takes time to digest and mull over. Pop culture tends to be easier to understand.

Bettmann said more classical music and dance outlets are trying to promote themselves through elaborate public relations campaigns because traditional news groups have stopped covering them. The Chicago Symphony, for example, has started producing its own magazine.

“The public doesn’t get the same thing in terms of independence of judgment,” said Bettman, about media and publications produced by arts organizations. Bettmann said it is important to maintain professional, independent classical art criticism, which he said has evolved over centuries.