Willow Brugh is the director of Geeks Without Bounds, an accelerator for humanitarian projects. In times of crisis, the group deploys teams of hacker volunteers and humanitarians to provide technology solutions to troubled areas. 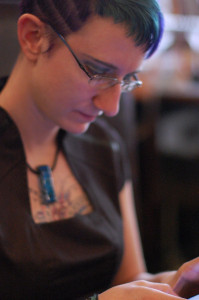 In October 2012, when Hurricane Sandy made landfall, the Federal Emergency Management Agency deployed its Field Innovation Team, which included Brugh and members of Geeks Without Bounds.

“The Field Innovation Team was about how we could start to bridge different groups in figuring out what they need and having a better response system in general,” Brugh said. “It was very much around field response organizations, NGOs [non-governmental organizations] and NPOs [non-profit organizations] to help them often only support the official responders. What we’re finding is that that’s not a scalable approach. So, if you only set up network for the first-responders, the Office for Emergency Management, the police department, etc., they’re better off, but they’re still trying to deal with a massively messy situation.”

By shifting the focus to the affected population, the technology volunteers were able to help the general populace help themselves.

“Because Geeks Without Bounds does so many hackathons, people trying to build technology for humanitarian and disaster response situations, and because we run this accelerator for six months, which provides mentorships and things like business development and human rights and security, we have a really high exposure rate to a lot of new and interesting tools that are out there and also people who are technically adept at making what’s out there work better,” Brugh said.

This expertise allowed Geeks Without Bounds the adabtablity to identify and deploy the most appropriate technological solution to the crisis, even if it wasn’t something that the first responders or other groups had previously used.

Brugh and others like her have much to offer individuals around the world, including journalists, who want to learn more about Open Data privacy and anonymity tools to help protect them and their sources from online surveillance or censorship. One of the best places to access this information is at a hackathon.

“Hackathons are work-focused events, mostly around technical challenges, where people with a varied skill set get together around a shared objective, and they have a time limit, the production of something,” she said. “I really like the Open Source approach of we’re going to sprint on an existing code base, so you’re not really starting anything from scratch.”

On Saturday, Jan. 11, Brugh will be the facilitator for the DC Internet Freedom Hackathon in Washington, D.C.

“This particular one is about taking a look at how a lot of crypto tools that we have are not really friendly for the user,” she said. “You have to be pretty well entrenched in some nerd communities in order to be able to make it work. By looking more at the frontend and how people use these tools, we hope that more folk will, which makes everyone safer.”

Mystery of the Dramatic Drone