Wouldn’t you want to meet the person responsible for The A.V. Club, the entertainment and culture sister publication of The Onion?

Stephen Thompson, who now works as a writer and editor for NPR Music, got in on the ground floor at The Onion, a farcical publication that mocks current events and media. He started writing there when he was just 20 years still a student at the University of Wisconsin in Madison. It was the early 1990s and The Onion was a only a couple of years old at that point, but the staff had grand aspirations. 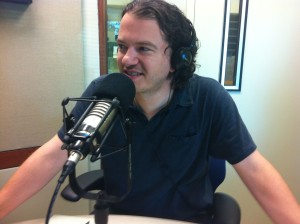 Stephen Thompson of NPR talks to It’s All Journalism producers Julia O’Donoghue and Michael O’Connell about the places humor intersects with music, podcasting and journalism. (Photo by Michael O’Connell)

“The comedy staff could only generate so much comedy. You needed other stuff to put in the paper,” he said.

Thompson stayed at The Onion for 12 years, watching it transition from a tabloid only circulated in his college town to a global brand. Finally, feeling burnt out, he decided to take a time out from his career.

While attending the South by Southwest music festival in Austin, Texas, he struck up a conversation with an NPR arts reporter who helped him get his next job in Washington, D.C. Thompson helped start NPR Music in 2007.

Thompson also helped create the Tiny Desk Concert series, where musicians come perform at his coworker’s desk in the NPR building. We discussed a couple of specific Tiny Desk Concerts on the podcast – specifically the Adele and Wilco appearances.

Thompson writes about music for NPR, but he considers himself more of a curator than a critic.

“In part because there is limited air time, you almost just don’t have the time. … Why waste your time on bad music?” he said.

Thompson also appears on the The Pop Culture Happy Hour podcast (a personal favorite) and the All Songs Considered podcast.

“The way we designed it was it was the sort of conversations we had anyway,” said Thompson of Pop Culture Happy Hour.

That’s actually the first place I found Thompson. The podcast’s panelists seemed so delightful that I decided I was going to invite one of them onto our podcast. My scheme worked! So you should listen up!